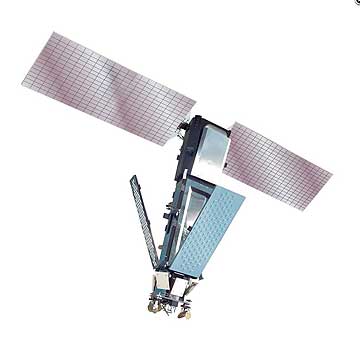 "This milestone brings us one step closer to accurate space weather forecasts around the Earth," said APL’s Dr. Brian J. Anderson, principal investigator and the scientist who spearheads the program. "Solar storms can disrupt satellite service and damage telecommunications networks, cause power grid blackouts and even endanger high-altitude aircraft. The next wave of solar storms will occur over the next three to five years and recent solar activity is just the beginning of a long, stormy space weather ‘season.’ The timing for AMPERE is just right because we need this system both to help us understand how solar storms disturb the space environment and to develop reliable monitoring and forecasts of major space weather storms."

The Boeing engineering team and scientists at APL have proven that the program yields continuous, real-time measurements of the magnetic field over the entire Earth simultaneously with up to 100 times greater sampling density than previously possible.

“The electric currents linking Earth’s uppermost atmosphere with space — those same currents that generate the aurora borealis — also produce magnetic signatures that can only be sensed from space,” said Dr. Anderson. “This achievement by the AMPERE team is a quantum advance in science that allows the first continuous (24/7) global observation of space weather.”

The AMPERE program is funded by a $4 million grant from the National Science Foundation (NSF) to the Johns Hopkins Applied Physics Laboratory. The laboratory, working with Boeing, partnered with Iridium to introduce this new capability by using Iridium's commercial satellite constellation.

“NSF is proud and thrilled to be the catalyst for this breakthrough project,” said Dr. Therese Jorgensen, program director in NSF’s division of Atmospheric and Geospace Sciences which sponsors AMPERE. “AMPERE is a hugely exciting and novel project that brings the best of university scientists together with commercial space assets and industry engineering expertise to open a new window on our home planet’s response to solar activity.”

Boeing presently handles data collection, processing and packaging from the Iridium satellite fleet for AMPERE and transfers the magnetic field samples to the Science Data Center at APL (in Laurel, Md.), where the data are processed to yield globally integrated views of Earth’s space environment. Leveraging more than nine years of operations and maintenance support to the Iridium satellite fleet, Boeing was able to create a new data pathway for transferring magnetic field samples from the satellites to the ground station – providing the data in real-time and up to 100 times more frequently than before. Based on this innovation, AMPERE provides data every two to 20 seconds from each Iridium satellite and the data are available within minutes for analysis. Previously, data were only sampled once every three minutes and were available for analysis only the following day.

“This program provides a model of a successful public-private partnership between the scientific and academic communities and industry,” said Steve Oswald, vice president and general manager, Boeing Intelligence and Security Systems. “Together this team will answer critical scientific questions about our home planet.” AMPERE uses Iridium's network of 66 low-Earth orbiting (LEO) communication satellites, the only system capable of providing a fully global view.

"The AMPERE program validates the potential for using sensors on the LEO Iridium satellites to provide unprecedented visibility over the entire Earth's surface and its atmosphere," said Don Thoma, executive vice president, Marketing, Iridium. "We are actively in discussions with partners in the scientific community to incorporate a wide range of Earth observation and remote sensing missions through hosted payloads on Iridium NEXT, our next-generation satellites."

The next step for the APL scientists will be to develop the analytical tools to evaluate and forecast severe geomagnetic storms in space. This phase of the project is on schedule and the first release of AMPERE space weather products to the scientific community is planned for the fourth quarter of 2010.