US Navy and Lockheed Martin Delighted With Successful MUOS 5 Deployment


On orbit testing and deployment of solar arrays and antennas are reasons for elation by the US Navy (USN) and Lockheed Martin (LMT) in regard to the fifth Mobile User Objective System (MUOS) satellite.

Originally launched from Cape Canaveral Air Force Station on June 24th, MUOS-5 experienced an anomaly with the orbit raising propulsion system on the satellite's way to geosynchronous orbit on June 29th. Out of caution, the USN and Lockheed Martin engineering team immediately placed the satellite in a safe mode in transfer orbit as they investigated and examined their options. 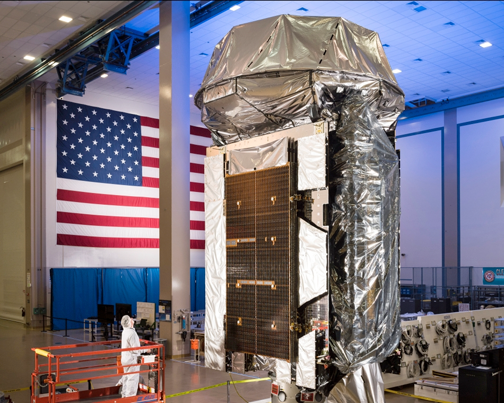 MUOS-5 completed orbit raising on October 22nd and the satellite's solar arrays were successfully deployed, ensuring power generation as well as all of the craft's antennas for mission ops engagements on October 30th. The satellite will begin on orbit testing before being turned over to the USN for further testing and eventual commissioning into service.

For the Navy, MUOS-5 completes a network of orbiting satellites and relay ground stations that is revolutionizing secure communications for mobile military forces. Users with MUOS-capable terminals will be able to seamlessly connect beyond line-of-sight around the world and into the Global Information Grid (GIG) , as well as into the Defense Switched Network (DSN). MUOS' capabilities include simultaneous, crystal-clear voice, video and mission data over a secure high-speed Internet Protocol-based system.

The MUOS network provides near-global coverage, including a communications reach that delves deeply into the polar regions. Once fully operational, the network will provide users with 16x more communications capacity than the legacy system that will eventually be replaced.

The Navy's Program Executive Office for Space Systems and their Communications Satellite Program Office are responsible for the MUOS program and they are based in San Diego. Lockheed Martin assembled and tested all five, now-on-orbit, MUOS satellites at its Sunnyvale, California, facility.

According to Mark Woempner, director of Narrowband Communications Systems at Lockheed Martin, the Navy and Lockheed Martin engineering team were able to isolate the issue and develop a work-around using alternative propulsion. Once we had a plan together, in early October we carefully re-started orbit raising maneuvers.http://LMC_l