Of the world’s 195 countries, 72 have official space agencies, including Nigeria, Bangladesh, Peru, and Bolivia. Kyrgyzstan does not. So a group of young women decided to start their own. 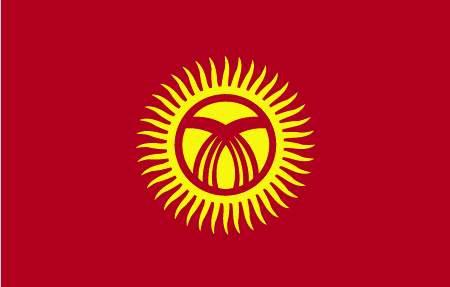 Flag of Kyrgyzstan Flag Description: red field with a yellow sun in the center having 40 rays representing the 40 Kyrgyz tribes; on the obverse side the rays run counterclockwise, on the reverse, clockwise; in the center of the sun is a red ring crossed by two sets of three lines, a stylized representation of the roof of the traditional Kyrgyz yurt.

Kyrgyzstan is not an easy place to be female; it was described last year by Reuters as “a nation rife with domestic violence, child marriage and bride kidnappings.” The dozen or so members of the Kyrgyz Space Program, who range in age from 17 to 25, came together for a free robotics course started by journalist and TED fellow Bektour Iskender last March and meet twice a week at the offices of Kloop, the independent journalism school Iskender runs in Bishkek, Kyrgyzstan’s capital. They are crowdfunding their work towards building and launching a cube satellite, a miniature design known as a CubeSat that can cost as little as $150,000 to produce.

The money that comes in will pay for the project in phases; the various funding tiers are named for prominent women in space, from Russian cosmonauts Valentina Tereshkova ($2/month) to American Peggy Whitson, who has spent more time in space than any other female astronaut in history ($1,024/month). The team hopes to have built it and ready for launch sometime next year.

Right now, 103 people have committed a total of $848 a month to the Kyrgyz Space Program—their name for the group—through Patreon, a crowdfunding platform aimed at “artists and creators.” However, they need an additional $152 each month to meet their next goal.

The program is a few hundred bucks past its initial goal of $500, which funds a basic engineering course for the team and allowed them to buy a 3D printer, and get started on the planning for the satellite. Getting to $1,000 a month will mean the group can assemble a prototype and test it on the ground.

If they can get to $2,500 a month, the Kyrgyz Space Program says it will arrange for training from the team who launched Lithuania’s first satellite (also a CubeSat) in 2014. At $5,000 a month, they’ll order the components needed for the CubeSat build itself, and $10,000 a month means they’d actually be able to build Kyrgyzstan’s first-ever satellite, send it to the International Space Station (they won’t have to build their own rocket; NASA, for example, has an initiative that brings CubeSats built by researchers, scientists, and students into space), and as their Patreon page explains, “have it launched onto the orbit.”

There have been other attempts to crowdfund space exploration; a group of Danish volunteers has successfully launched three crowdfunded rockets into space since 2013.

The team is realistic about what their first foray into space will accomplish, and simply launching a working CubeSat that can send and receive signals will undoubtedly be a rather remarkable success. But Kloop is trying to raise money for a second, more advanced satellite with additional capabilities.

“They’re exploring the idea of directing the sun’s rays toward orbiting garbage to vaporize it and using the energy to propel the CubeSat,” Iskender told TED Ideas in an interview published earlier this week.

Another possibility will be using the satellite to take photographs of the Tibetan plateau, which Iskender noted is “one of the least-photographed places in the world from space.”