Vega Is Loaded + Ready To Launch The IXV Spaceplane

[SatNews] The fourth Vega has completed its build-up at the Spaceport in French Guiana, preparing this lightweight member of Arianespace’s launcher family for final checkout ahead of its February 11 liftoff with the European Intermediate eXperimental Vehicle (IXV) spaceplane. 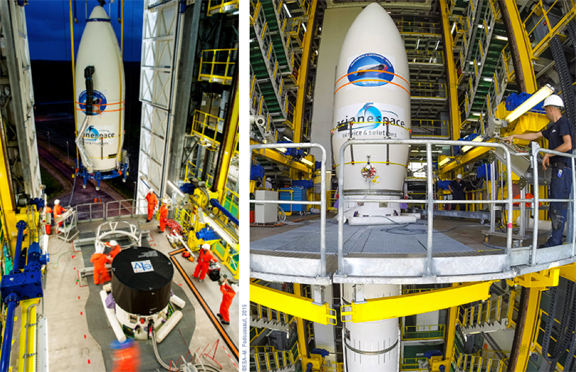 The Intermediate eXperimental Vehicle (IXV) – which is enclosed in its protective payload fairing – is mated atop the lightweight Vega member of Arianespace’s launch vehicle family at the Spaceport in French Guiana.

This assembly process was concluded during the weekend with integration of the unmanned IXV, enclosed in its protective payload fairing, atop the launcher. Installation took place inside the mobile gantry at the Spaceport’s ZLV launch site for Vega.

The upcoming Vega mission is designated Flight VV04 in Arianespace’s numbering system, and it will mark the launcher’s second flight within the European Space Agency-managed VERTA (Vega Research and Technology Accompaniment) program to showcase this vehicle's flexibility and versatility.

Its IXV passenger—built for the European Space Agency by Thales Alenia Space—will test reentry technologies that can be used in developing systems and advanced technologies for future transportation systems. IXV is to be deployed by Vega into a suborbital trajectory on a mission that will last approximately 100 minutes from liftoff to the spaceplane’s splashdown in the Pacific Ocean, where it is to be picked up by a recovery ship.

Vega is one of three launchers operated by Arianespace from French Guiana, along with the medium-lift Soyuz and heavyweight Ariane 5. Industrial prime contractor for Vega is ELV S.p.A., a company created in December 2000 by Avio and the Italian Space Agency (ASI).

The February 11 mission will be the first liftoff of an Arianespace launcher family member in 2015, initiating another busy year of flight activity for the company.