[Satnews] NSSLGlobal announces a significant upgrade to its fully-owned and operated VSAT network with the activation of two new beams.

Launched in response to specific market needs, these two beams significantly extend the reach of NSSLGlobal’s global VSAT network, providing its maritime customers with wider and more robust connectivity at sea, whilst also boosting coverage on land. The company's VSAT network already covers 95 percent of the Earth’s surface, including all of the world’s major commercial shipping routes, mining areas, offshore oil rigs and fishing domains. These additional beams will not only extend the network, but also provide greater availability through overlapping coverage in key areas of these markets. 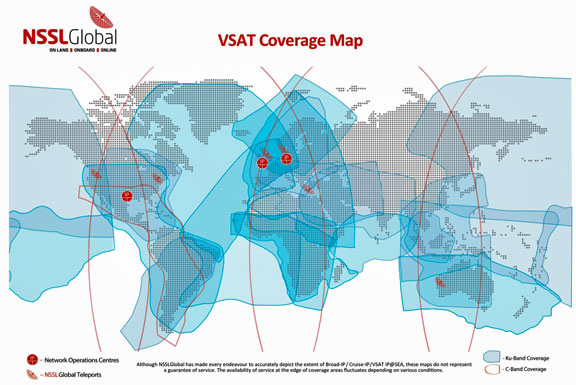 The new Ku-band beam went live at the beginning of January 2016 and runs on the Yamal-402 satellite (55 degrees East) covering Sub-Saharan Africa and waters around Madagascar and the Indian Ocean. This will further extend NSSLGlobal’s coverage into the Indian Ocean, further improving user experience for vessels cruising in the Indian Ocean and using NSSLGlobal's VSAT service. In addition, this beam will further strengthen the coverage over the African continent, which is also a strategically important area.

NSSLGlobal also added new, global C-band coverage in January 2016. Running on the Intelsat IS-23 (53 degrees West), the new beam is specifically targeted to give increased capacity and alternative look angles for vessels in the Gulf of Mexico. The beam also covers most of the North and South American mainland, coastal waters to the West of Mexico, and significant coastline around the South Americas.

In September 2015, NSSLGlobal won the ‘VSAT Service Provider of the Year’ award at the prestigious VSAT Industry Awards. The award recognized the scope and quality of the services and coverage NSSLGlobal provides, as well as its customer-centric approach and leading support services for both sea and land-based satellite communications.

Sally-Anne Ray, Managing Director of NSSLGlobal, said, “The addition of these new beams highlights NSSLGlobal’s ongoing commitment to investing in our fully owned and controlled VSAT infrastructure and giving our customers the industry’s best service. Owning our infrastructure gives us the flexibility to cater for every potential client’s need, whether that’s with off-the-shelf or fully-bespoke products and packages. This differentiates NSSLGlobal from most other providers, allowing the company to deliver world-leading coverage, service and support, and create fully-bespoke VSAT packages for its customers. Our new Gulf of Mexico beam will offer vessels a better, more robust service in one of the most crowded shipping areas in the world. The new Ku- beam helps maritime companies to take advantage of faster shipping routes in the Indian Ocean, while maximizing satellite coverage uptime. Ultimately we want NSSLGlobal to be known for offering the best, widest and most robust coverage in these strategically important regions.”