[SatNews] Rani Gran of NASA's Goddard Flight Center has reported that the pressure readings from the Tropical Rainfall Measuring Mission's (TRMM) fuel tank in early July revealed that the TRMM satellite was nearly at the end of its fuel supply.

As a result, NASA has ceased maneuvers to keep the satellite at its operating altitude of 402 kilometers (~250 miles). With its speed decreasing, TRMM has begun to drift downward. A small amount of fuel remains to conduct debris avoidance maneuvers to ensure the satellite remains safe. TRMM's slow descent will continue over the next two to three years. It will continue to collect useful data as its orbit descends to about 350 (217.5 miles) over the next 18 months.  Once TRMM reaches an altitude of 150 to 120 kilometers (93 to 75 miles), it will re-enter the atmosphere. The TRMM satellite, a joint mission between NASA and the Japan Aerospace Exploration Agency (JAXA), was launched in 1997 to measure precipitation over the tropics, carrying the first precipitation radar into space.

"TRMM has met and exceeded its original goal of advancing our understanding of the distribution of tropical rainfall and its relation to the global water and energy cycles," said Scott Braun, the mission's project scientist at NASA's Goddard Space Flight Center in Greenbelt, Maryland. 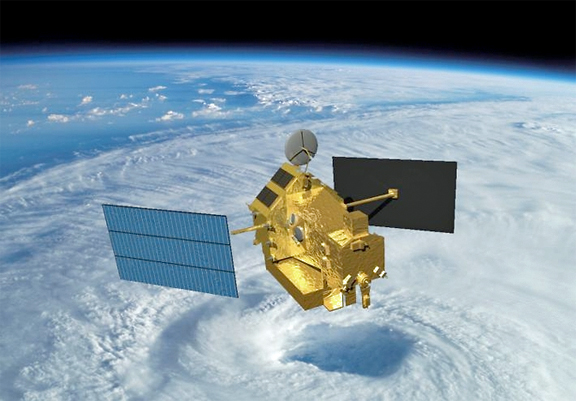 Artistic rendition of the TRMM satellite in space over a tropical cyclone.

TRMM's planned three-year mission has already lasted 17 years and has provided researchers with an unprecedented data set that combined more traditional radiometer measurements with 3-dimensional radar scans across the tropical ocean and into the lower mid-latitudes from 35N to 35S latitude. Also unique to TRMM is its inclined orbit that allows it to cut across the paths of polar orbiting satellites and revisit locations at different times of day, which is important for understanding how rainfall evolves with the day/night cycle. TRMM provided the first measurements of this type over the tropical ocean.

Scientists have used TRMM data to provide high quality climatology of rainfall, including variability on day/night, monthly, seasonal, and yearly time scales. Scientists also use TRMM to study extreme convection and precipitation events including tropical cyclones, floods, landslides, and drought, the impact of humans on precipitation. TRMM data have also allowed researchers to map lightning in many regions. In addition, TRMM rainfall estimates have been used in a number of applications including hydrological modeling to monitor floods, stream flow, and drought; tropical cyclone tracking and forecasting; climate and weather model validation and improvement; disease monitoring in flooded areas; and fire detection.

Some TRMM observations will continue as the spacecraft descends to 335 kilometers (~208 miles), at which time the satellite will be shut down, currently estimated to be in February of 2016. This date may change depending on solar activity, since energetic particles in solar flares heat the upper atmosphere, which expands the atmosphere toward space so that the satellite flies through thicker atmosphere, increasing drag and lowering the spacecraft more quickly. After being shut down, TRMM has a 95 percent probability of re-entering the atmosphere in a time window between May 2016 and November 201—the current projected re-entry date for the satellite is around November 2016.

TRMM's long term rainfall data gives scientists a better understanding of global rainfall patterns. Shown here is TRMM data merged with other satellites' rain data from 40N to 40S latitude. The colors show the average of all the monthly rain averages from 1998 to 2010.

The TRMM Microwave Imager (TMI) and Lightning Imaging System will continue operating during the entire drift down period, although TMI data will be affected. The angle at which TMI views Earth's surface will be changing as will the field of view. However, the science team expects data to continue to be useful for rain estimates, and tropical cyclone and flood monitoring and prediction. Because of how the Precipitation Radar works, useful science data can only be collected within narrow altitude ranges near 400 (250 miles) and 350 (217.5 miles) kilometers. JAXA, which manages the Precipitation Radar data, has indicated that they may stop distribution of the radar data outside of those ranges. A gap in precipitation data coverage from satellites will not occur because NASA and JAXA launched TRMM's successor mission, the Global Precipitation Measurement (GPM) Core Observatory, on February 27, 2014. The GPM Core Observatory began its prime mission on May 29, and will have several additional months of overlap with TRMM data as it descends. The GPM Core Observatory continues and expands upon TRMM's capabilities, carrying an advanced GPM Microwave Imager and Dual-frequency Precipitation Radar.

The GPM Core Observatory's area of coverage extends beyond TRMM's, covering the area from the Arctic Circle to the Antarctic Circle. While this means fewer observations of the tropics, it also means that GPM will be able to observe hurricanes, such as Sandy in 2012, that travel north (or south) farther into the mid-latitudes. GPM will also be able to detect light rain and snowfall, a major source of available fresh water in some regions. The joint NASA/JAXA mission will study rain and snow around the world, joining with an international network of partner satellites to provide global precipitation datasets on half hourly and longer time scales. GPM data are already in use by hurricane forecasting agencies.

NASA's Earth infosite may be accessed at http://www.nasa.gov/topics/earth/#.U_vGuEhur_8