Closure to an event that began on Saturday, November 17, when Northrop Grumman's S.S. John Young Cygnus™ spacecraft was successfully launched on a mission to deliver supplies to the International Space Station (ISS), and today, Monday, the spacecraft has successfully docked at the ISS. 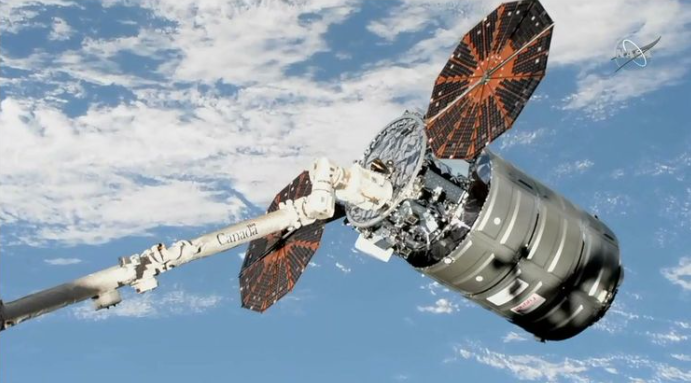 Cygnus launched aboard a Northrop Grumman Antares™ rocket on November 17, 2018 from the Mid-Atlantic Regional Spaceport Pad 0A on Wallops Island, Virginia. As the spacecraft moved closer to the space station over the following few days, Cygnus executed a series of thruster burns to raise its orbit.

“With the 20th anniversary of the International Space Station tomorrow, we stand with NASA as a proud mission partner in support of the ISS as a premier research facility in space,” said Frank Culbertson, president, space systems group, Northrop Grumman. “Our dedication of Cygnus in honor of NASA astronaut John Young is a fitting tribute to his efforts to enable future astronauts to live and work there to advance space exploration.”

Cygnus arrived at the space station with nearly 7,400 pounds (approximately 3,350 kilograms) of cargo, supplies and scientific experiments. The crew is now scheduled to open Cygnus’ hatch and make initial ingress into the cargo module to begin unloading the pressurized cargo. Cygnus will remain docked at the station for approximately two months before departing on secondary missions.

Once Cygnus is unberthed from the station, it will reposition to deploy three CubeSats via the NanoRacks External Cygnus Deployment Program from both above and below the space station. This specific satellite deployment operation marks the first dual altitude deployment for Cygnus, demonstrating the spacecraft’s capability beyond cargo delivery and removal.

The CubeSat known as MYSat-1 is among NanoRacks’ customers to be deployed and marks the first satellite developed by Khalifa University in Abu Dhabi, United Arab Emirates (UAE). MYSat-1 was developed as part of Khalifa’s Space Systems and Technology Concentration, a joint program established in 2015 in collaboration with UAE-based satellite operator Al Yah Satellite Communications Company (Yahsat) and Northrop Grumman. Engineers from both companies helped develop the initial curriculum for the concentration, and provided guidance and mentorship during the design phase of the MYSat-1 satellite.

Cygnus is also prepared to execute on the inaugural flight for the Slingshot CubeSat Deployer System which is another example of the cargo vehicle’s ability to meet multiple customer needs. Slingshot is a flexible platform that can fly hosted payloads and CubeSats. NASA astronauts will install the system on Cygnus after the primary mission is completed. Upon completion of its secondary missions, Cygnus will perform a safe, destructive reentry into Earth’s atmosphere over the Pacific Ocean.