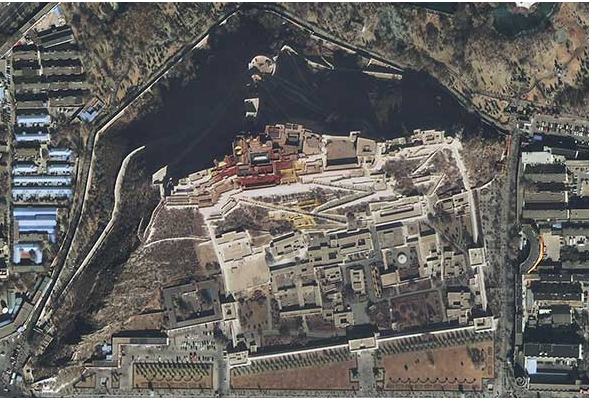 Potala Palace in Lhasa, Tibet autonomous region, is shown in an image released by the SuperView network. (Provided to China Daily)

China has gone hi-res with the launch of its first commercial Earth observation satellite.

China Aerospace Science and Technology Corp, the country's major space contractor, has released several images taken by SuperView 1A and 1B, the first two satellites of the SuperView system.

The images show the Potala Palace and a local convention center in Lhasa, capital of the Tibet autonomous region, as well as the Hong Kong Convention and Exhibition Center.

The SuperView 1A and 1B were lifted atop a Long March 2D carrier rocket on December 28 from the Taiyuan Satellite Launch Center in Shanxi province. They entered preset orbits on about Tuesday and have sent more than 1,200 ground images back to the control center, according to the State-owned CASC.

The two are operating at an altitude of 500 kilometers above the Earth, with a panchromatic resolution of 0.5 meters and multispectral resolution of 2 meters, said Zhang Xiaomin, a senior researcher at the company's China Academy of Space Technology, who oversees the system's development.

China now operates the Gaofen network that has four satellites in service, but the system mainly serves government departments and the public sector rather than businesses, said Yang Yike, director of high-resolution satellite projects at CASC.

The two identical satellites are part of the SuperView network of at least 24 Earth observation satellites, which CASC expects to become one of the world's largest commercial providers of space imagery and geospatial data, Yang said. He added that the whole system will be built by 2022.