The Canadian Department of National Defence has awarded a C$15 million contract to Space Flight Laboratory (SFL) at the University of Toronto Institute for Aerospace Studies (UTIAS) for development of multipurpose smallsats to support Arctic surveillance — upon successful completion and testing of the prototype, two additional smallsats will be built to create a small formation.

On behalf of Defence Minister Harjit S. Sajjan, Member of Parliament for York Centre, Michael Levitt announced the contract on February 1, 2019, during a ceremony held at UTIAS in Toronto. The contract was awarded through Public Services and Procurement Canada under the All Domain Situational Awareness (ADSA) Science & Technology (S&T) Program.

The UTIAS SFL smallsats being developed will include multiple sensors on a constellation operating in close formation in LEO to allow for quick and timely detection and identification of surface or airborne targets. These concurrently-obtained sensor observations are expected to improve the reliability of the detection and identification performance, which is not feasible when individual sensors are located on non-collaborating satellites. 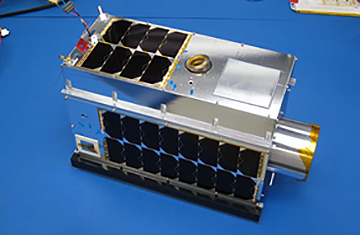 The GHGSat-3 smallsat. Photo is courtesy of UTIAS-SFL.

Established in 1998 as a self-sustaining specialty lab at the University of Toronto Institute for Aerospace Studies (UTIAS), SFL has built more than 25 smallsats with more than 95 cumulative years of successful operation on orbit. SFL’s attitude control technologies have also been applied successfully in several other microspace programs as well, including the 2016 GHGSat-D greenhouse gas emissions monitoring satellite and the 2013-2014 BRITE space astronomy constellation. 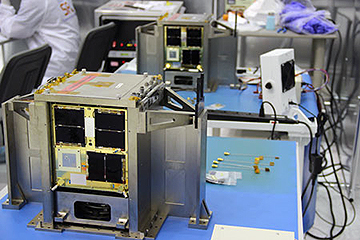 A BRITE smallsat... The BRITE Constellation will monitor for long stretches of time the brightness and color variations of most of the brightest stars visible to the eye in the night sky. These stars include some of the most massive and luminous stars in the Galaxy, many of which are precursors to supernova explosions.
Photo is courtesy of UTIAS-SFL.

As outlined in its defence policy Strong, Secure, Engaged, the Department of National Defence is investing in defense research and development to produce innovative solutions to surveillance challenges in Canada’s North, particularly in the priority areas of Arctic joint intelligence, surveillance and reconnaissance. Surveillance solutions support the Canadian government’s ability to exercise sovereignty in the North and provide a greater awareness of safety and security issues, as well as transportation and commercial activity in Canada’s Arctic. In addition, solutions achieved under the ADSA program will contribute to joint efforts between Canada and the United States to modernize elements of the North American Aerospace Defense Command (NORAD).

The ADSA S&T Program leverages innovative science and technology expertise from other government departments, academia, industry and allies, to identify, assess and validate technologies in support of air and maritime surveillance, particularly in the North. Through a five-year investment of $133 million through to 2020, the ADSA S&T Program is supporting the development of options for enhanced domain awareness of air, maritime surface and sub-surface approaches to Canada, in particular those in the Arctic. 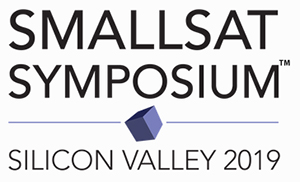 SFL will be exhibiting at the Fourth Annual SmallSat Symposium being held February. 5-7, 2019, in Silicon Valley, California. Booth 17. Details are readily available at at this direct event link...

SFL Director and Founder Dr. Robert E. Zee said that Space Flight Laboratory is honored to assist the Department of National Defence in developing next-generation satellite technology that could be used to monitor Canada’s vital Arctic region. This investment acknowledges SFL as one of the world’s preeminent developers of advanced attitude control and formation-flying technologies for microsatellites.