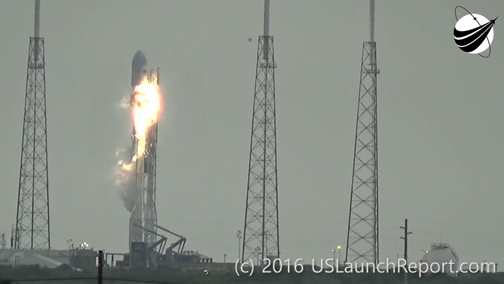 The explosion of the SpaceX Dragon and the destruction of the Amos-6 satellite at Cape Canaveral AFS on September 1st.

Ilan Gattegno and the Israel Hayom infosite staff have reported that the Falcon 9 SpaceX rocket that carried the Amos-6 satellite suffered "a large breach in the cryogenic helium system,"causing the launch vehicle to explode on the launch pad in Florida," said the company—the cause of the breach remains unknown and "all plausible causes are being carefully investigated," stated the report.

The Amos-6 satellite, carrying state of the art communications technology, was destroyed on September 1st when an explosion engulfed the Falcon 9 SpaceX rocket during a routine static test at the Cape Canaveral Air Force Station. The explosion occurred two days before the satellite was scheduled to be launched into orbit. Amos-6 had been slated to replace the aging Amos-2 communications satellite, which was launched into orbit in 2003.

A statement posted on SpaceX's website over the weekend said the investigative team, comprising SpaceX, the Federal Aviation Administration, NASA, the US Air Force, and industry experts, was "scouring through approximately 3,000 channels of engineering data along with video, audio and imagery. The majority of debris from the incident has been recovered, photographed, labeled and catalogued, and is now in a hangar for inspection and use during the investigation. At this stage of the investigation, preliminary review of the data and debris suggests that a large breach in the cryogenic helium system of the second-stage liquid oxygen tank took place."

SpaceX said the cause of the potential breach remains unknown and that "all plausible causes are being tracked in an extensive fault tree and carefully investigated."