All the preparation and planning is down to the final stages as the heavy-lift Ariane 5 readies for Arianespace's upcoming mission with the world's largest commercial telecommunications satellite to be launched was moved to the Final Assembly Building. This cleared the way for its integration of the TerreStar-1 payload. 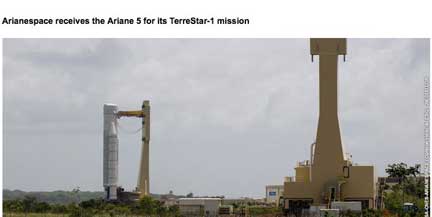 Riding atop its mobile launch table, the Ariane 5 for Arianespace’s upcoming flight moves to the Final Assembly Building, while the second Ariane 5 launch table is visible in the foreground. The availability of two launch tables enables Arianespace to prepare its missions in parallel, allowing flexibility and reactivity in flight scheduling and execution.

Rolling out of the Spaceport's Launch Integration Building where it underwent the basic build-up, Ariane 5 was transferred to the Final Assembly Building where industrial prime contractor EADS Astrium formally delivered the vehicle to Arianespace.

The flight with TerreStar-1 is planned for late June from French Guiana, and will be Arianespace's third mission in 2009 with its workhorse launcher.

TerreStar-1 was built by Space Systems/Loral, and will be operated by Reston, Virginia-based TerreStar Networks, which plans to offer next-generation mobile communications for users requiring coverage throughout the United States and Canada.

The satellite is to provide critical services for government, emergency responder, rural communities and commercial users, using the 2 GHz spectrum to deliver voice, data and video communications to satellite/terrestrial mobile devices the size of a typical smart phone.

TerreStar-1 will ride as a single payload on the dedicated Ariane 5 flight.

Arianespace is targeting a total of seven launches in 2009, underscoring the company's ability to meet mission timing requirements of its international customer base.  The two on-target Ariane 5 flights performed so far this year were the February 12 liftoff with the HOT BIRDT 10, NSS-9 telecommunications satellites, plus a pair of Spirale auxiliary payloads for the French military; and was followed by the May 14 launch of Europe's Herschel and Planck deep-space telescopes.