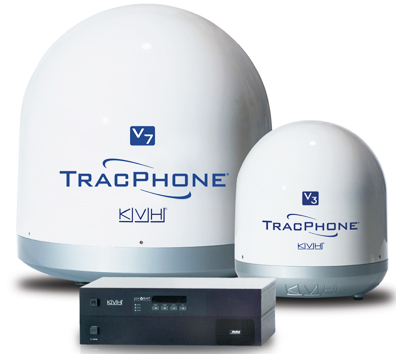 KVH TracPhone infopage
[SatNews] Doubling uplink speeds and other improvements are being brought to play...

The suite of enhancements is already being rolled out across the global mini-VSAT Broadband network, which is comprised of 10 powerful Ku-band satellites and 14 transponders linked via hubs around the world for a seamless global network. The mini-VSAT Broadband network currently delivers approximately 100 terabytes of data and connects more than 1.5 million phone calls per year. With the recent shipment of the 1,500th TracPhone system for use with the network, mini-VSAT Broadband is now the world’s fastest growing and largest maritime Ku-band VSAT network. In addition to the 1,500 systems shipped to customers, many additional systems are currently fielded for trials. The network uses ViaSat’s ArcLight® spread spectrum technology, which was designed specifically for mobile use. ArcLight is unique due to its efficient reuse of satellite channels, fast speed, low latency, and its ability to support very small antennas that provide reliable service, even in poor weather conditions. KVH manufactures two fully integrated onboard systems for the mini-VSAT Broadband network – the award-winning 24-inch diameter TracPhone V7 and the compact, 14.5-inch diameter TracPhone V3, which is the world’s smallest maritime VSAT antenna. Both systems include a versatile below-deck control unit and ArcLight modem.