The nose cone of a long-range North Korean rocket rest on its launch pad and has been imaged by spy satellites. 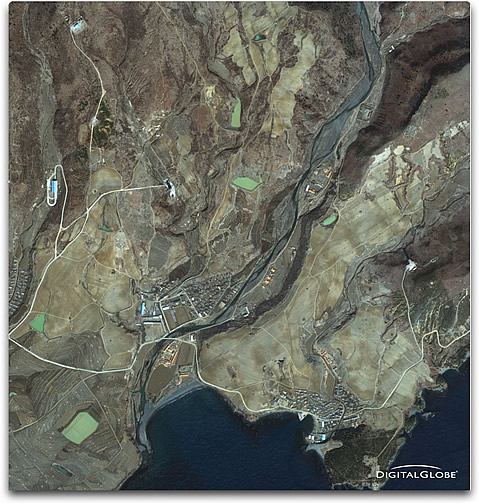 The EO photo, from DigitalGlobe, is a 2-foot high resolution, natural color, QuickBird satellite image that shows the Musudan Ri missle launch facility in North Korea. This site was known as Taepo-dong.

The satellite is believed by many to be a cover for a test of the rocket itself, which, in theory, could target Alaska. A South Korean government source told the Yonhap news agency, based in Seoul, the spy satellites captured the upper part of the North Korean rocket when the vehicle's coverings had been removed at the launch pad. There is some debate as to whether or not the payload is a satellite or a warhead. Seoul's Meteorological Agency has predicted snow and/or rain at the North Korean launch site on April 4th, with could skies on April 5th, and clearing skies from April 6th through the 10th.

Possibly in exchange for nuclear expertse, there are believed to be 15 Iranian missle experts in North Korea assisting in the launch preparations. These include experts from Shahid Hemmat Industrial Group, the Iranian rocket and satellite manufacturer. Japan has stated they will destory any rocket that is heading for their country and the U.S. has also indicated such will be the fate of the rocket if determined to be a ballistic missile. South Korea, the U.S. and Japan have all warned the North Korean government that the rocket launch is in violation of a UN Security Council resolution that bans that country from engaging in any ballistic missile testing.