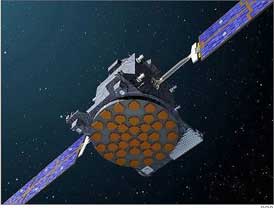 Thales Alenia Space shared the news with SatNews that they were awarded the contract to provide ESA Galileo system Support Services, lasting from 2010 through 2016. There was strong competition for this service, which was signed at the ESTEC headquarters of the European Space Agency. Valued at approximately euros 85 million, it will cover the period 2010 through 2014. The project has been delayed by more than a decade, but reports now indicate Galileo will be developed to become operational in early 2014.

Galileo is Europe's contribution to the Global Navigation Satellite System (GNSS). It is scheduled to be fully operational worldwide before the end of this decade with overall costs estimated at euros 3.7 billion. GALILEO will consist of 30 satellites positioned in three orbits at an altitude of approximately 23.000 km and a worldwide network of ground infrastructure. Galileo is to be seen as an independent but complementary system to existing ones such as GPS (USA) or GLONASS (Russia). The objective is to make the already existing and future satellite-based navigation systems inter-operational and compatible for the benefit of the user world. The involvement of Thales in the Galileo program started years ago and followed an industrially coherent rationale.

Luigi Pasquali, CEO for Thales Alenia Space Italy, today attending the signing ceremony at ESTEC, declared: “Thales Alenia Space is particularly proud to sign this important contract  obtained under a strong competition. This contract confirms the key role played by our company in one of Europe's most ambitious space projects. In the Rome factory, Thales Alenia Space is already fully involved in the assembly, integration and testing of the 4 IOV (In Orbit Validation) satellites of the constellation, and is now ready to face up to this new challenge, providing system Support Services. This contract allows Thales Alenia Space Italy to perform the overall System Design, the System Security Design, the overall System Integration, Verification and In Orbit Validation".