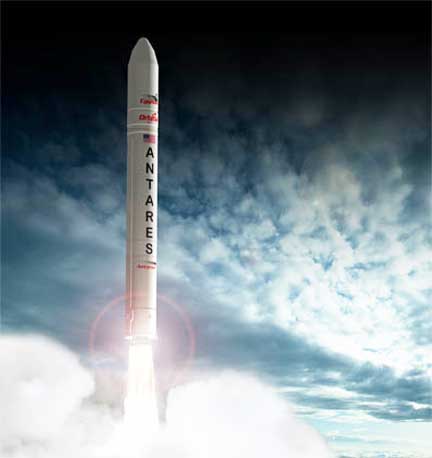 ...“on-ramp” its Antares™ medium-class launch vehicle onto the NASA Launch Services-II (NLS-II) program. The NLS program is a contracting mechanism that allows NASA to procure qualified launch vehicles that have completed stringent technical and pricing reviews. The Antares rocket joins other Orbital launch vehicles, as well as those from other launch services providers, on the NLS program. Under the NLS program and other contracts, Orbital rockets have carried out 27 successful missions for NASA since 1996, including the recent successful launch of Orbital’s small-class Pegasus rocket, which carried the company-built Nuclear Spectroscopic Telescope Array (NuSTAR) satellite into orbit earlier this month.

Orbital is finalizing the development and ground testing of the Antares rocket and is scheduled to conduct two launches before the end of the year under the Commercial Orbital Transportation Services (COTS) demonstration program with NASA. In addition, Orbital will launch eight operational cargo resupply missions to the International Space Station (ISS) using Antares vehicles through 2016 under NASA’s Commercial Resupply Services (CRS) contract. The COTS and CRS flights will launch from NASA’s Wallops Flight Facility in eastern Virginia, which is ideally suited for ISS missions, and can also accommodate launches to other mission orbits. In addition, Orbital is currently evaluating its options for development of a west coast launch site that would enable the Antares rocket to address an even wider range of customer missions.

The Antares medium-class launch system will provide a significant increase in the payload launch capability that Orbital can provide to NASA for its missions. The Antares rocket will be able to launch up to 13,000 lbs. into low-Earth orbit, as well as lighter-weight payloads into higher-energy orbits. Orbital’s newest launcher is a cost-effective alternative to the medium- and intermediate-class launch vehicles currently on the NLS-II program, and is “right- sized” for many of NASA scientific payloads, which have traditionally flown on other medium lift launch vehicles.

On June 26th, there was an earlier story regarding Antares, which may be read at this direct link.