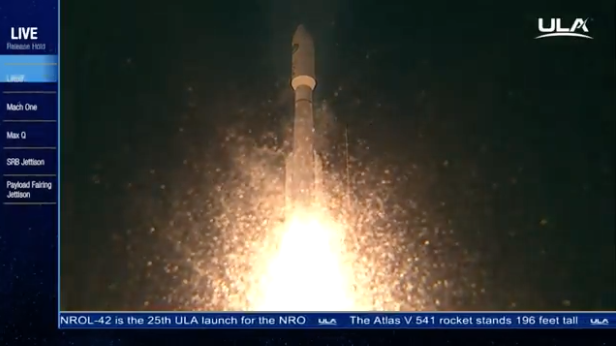 The night lit up as we watched the launch of ULA's Atlas V lift carrying NROL-42 with a classified national security payload at 10:49:47 PDT on Saturday, September 26 from Space Launch Complex 3, Vandenberg Air Force Base, California. Tonight's launch moved forward after the original launch date on Thursday, September 21 was scrubbed due to a battery that needed to be replaced on the Atlas V.

NROL-42 is believed to be the second spacecraft in the newest generation of Molniya-orbit signals intelligence satellites unofficially called Trumpet Follow-On. The highly-inclined orbit enables the craft to dwell over northern latitudes to collect surveillance.

This launch is ULA’s sixth of 2017 and 121st overall. NROL-42 is the 25th mission that ULA has launched for the National Reconnaissance Office (NRO) since the company was founded in 2006. This mission will mark the 73rd Atlas V launch since its inaugural launch on August 21, 2002.  The mission is to provide innovative overhead intelligence systems for national security. 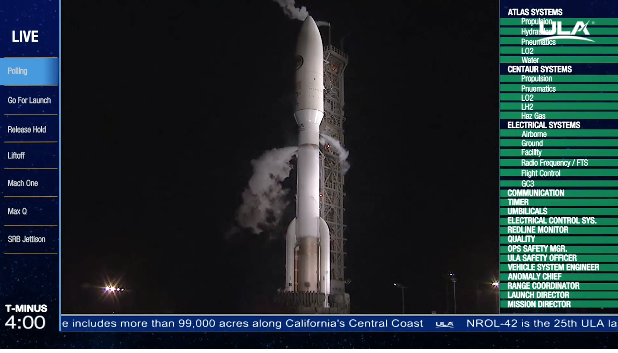 The NRO is the nation's eyes and ears in space, supporting policy makers, the Armed Services, the Intelligence Community, Departments of State, Justice and Treasury, and civil agencies. All of them depend on the unique capabilities NRO systems provide.

After a bit of a delay as shown on the Twitter comments, the launch proceeded. 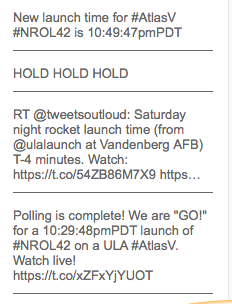 The National Reconnaissance Office's (NRO) systems are critical to National Security, U.S. policy makers, and war fighters. These systems provide the foundation for global situational awareness, and address the nation's toughest intelligence challenges. Frequently, NRO systems are the only collectors able to access critical areas of interest, and data from overhead sensors provides unique information and perspectives not available from other sources.

The NRO's key customers and mission partners include: policy makers, the Armed Services, the Intelligence Community, Departments of State, Justice and Treasury, and civil agencies. All of them depend on the unique capabilities NRO systems provide:

Together with other Defense Department satellites, the NRO systems play a crucial role in providing global communications, precision navigation, early warning of missile launches and potential military aggression, signals intelligence, and near real-time imagery to U.S. forces to support the war on terrorism and other continuing operations. 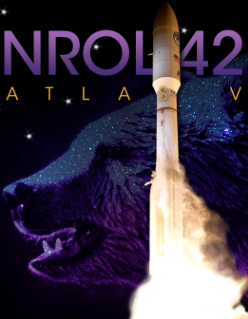 With its vigilance from above, the NRO gives America's policymakers, intelligence analysts, warfighters and homeland security specialists the critical information they need to keep America safe, secure, and free.

The NRO, one of 16 Intelligence Community agencies, was officially established in September 1961 as a classified agency in the Department of Defense (DoD). The existence of the NRO and its mission were declassified in September 1992.

A hybrid organization consisting of some 3000 personnel, the NRO is jointly staffed by members of the armed services, the Central Intelligence Agency, and DoD civilian personnel. The NRO is managed by a Director, a Principal Deputy Director, and a Deputy Director.