A New Dawn For Arianespace 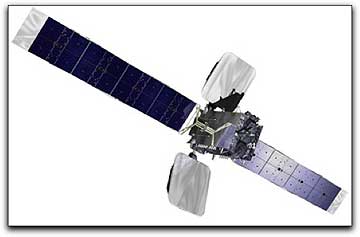 The launch is planned for the end of 2010 using an Ariane 5 or Soyuz launcher from the Guiana Space Center, Europe's Spaceport in French Guiana. The Intelsat New Dawn satellite will be the 50th Intelsat satellite orbited by the European launcher. This contract is in addition to the agreement signed by Intelsat and Arianespace in December 2008. New Dawn will provide critical communications infrastructure to Africa supporting wireless backhaul, broadband, direct-to-home, and video applications. The satellite will weigh about 3,000 kg at launch, and has a design life exceeding 15 years. Built by Orbital Sciences Corporation, Intelsat New Dawn will be fitted with 28 C-band and 24 Ku-band 36 MHz transponder units. It will be positioned at 33 degrees East and will deliver new capacity to Africa for voice, wireless backhaul, Internet and media applications.

Commenting on this latest contract, Arianespace Chairman and CEO Jean-Yves Le Gall said: "We are particularly proud of this opportunity to once again serve the world's leading satellite operator, in the form of this exciting New Dawn joint venture. For more than 30 years now, Arianespace and Intelsat have built up an extremely close, privileged relationship. This new contract, the 6th signed in 2009, is clear recognition of the quality and competitiveness of our launch Service and Solutions offer."

"Intelsat has had a long-term relationship with Arianespace. The Intelsat New Dawn satellite will be an integral part of our global, resilient satellite network, providing growth capacity and allowing us to further expand our services in Africa," said Ken Lee, Intelsat's senior vice president, space systems. "We look forward to working with Arianespace in the years to come as we introduce new spacecraft, optimized to deliver critical transmission services for our video, voice, network services and government customers."