SpaceX/Photo courtesy Mike Brown
[SatNews] This was no time for shaky hands when directing the mechanics to mate this capsule that will travel to the ISS.

The SpaceX Dragon Capsule successfully mated to the trunk that will carry unpressurized cargo to the International Space Station. It was a significant milestone for SpaceX.

The Dragon spacecraft is comprised of three main elements: 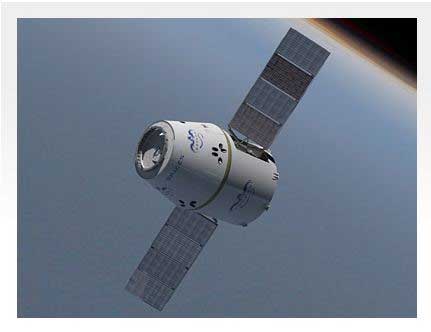 Dragon Spacecraft with Solar Panels deployed
In December 2008, NASA announced the selection of SpaceX’s Falcon 9 launch vehicle and Dragon spacecraft to resupply the International Space Station (ISS) when the Space Shuttle retires. The $1.6 billion contract represents a minimum of 12 flights, with an option to order additional missions for a cumulative total contract value of up to $3.1 billion.

Though designed to address cargo and crew requirements for the ISS, as a free-flying spacecraft Dragon also provides an excellent platform for in-space technology demonstrations and scientific instrument testing. SpaceX is currently manifesting fully commercial, non-ISS Dragon flights under the name “DragonLab”. DragonLab represents an emergent capability for in-space experimentation.