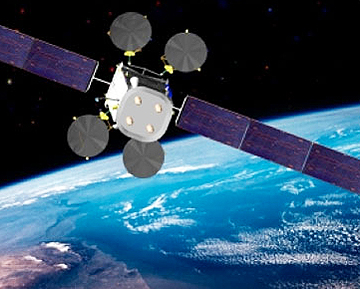 Artistic representation of the Intelsat 22 satellite, courtesy of Boeing.
[SatNews] Intelsat S.A. has announced that Etisalat UAE, a leading telecommunications services provider in the Middle East, has signed....

....a multi-year agreement for capacity on Intelsat 22, scheduled to launch in late March 2012. As part of the multi-transponder agreement, Abu Dhabi-based Etisalat will use the satellite's capacity to expand the reach of its broadband and GSM backhaul services to its customers in the Middle East, Africa, Europe and central Asia. The satellite will carry two Ku-band mobility beams providing coverage of the Indian Ocean region, which will blanket vital maritime and aeronautical routes. In addition, Intelsat 22 will have Ku-band capacity serving the Middle East and eastern Africa. Its C-band hemi beams coverage provides connectivity to and from most of Europe, Africa, the Middle East and eastern Asia. Intelsat 22 will replace Intelsat 709 and will serve the Indian Ocean region from 72 degrees East. For more information, visit Intelsat at stand S-F13 at CABSAT 2012, February 28th through March 1st, 2012. Intelsat company information link.