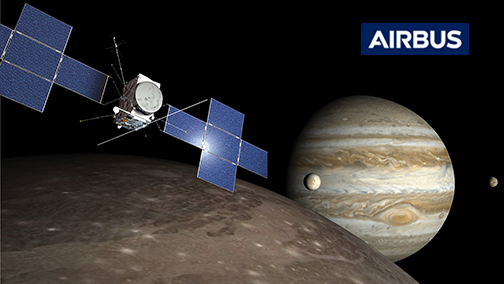 Happy birthday to a "cool" satellite: CryoSat-2, the European Space Agency´s ice and snow satellite, was launched from the Baikonour Cosmodrone into orbit on April 8, 2010.

Originally designed for a three and a half year mission, CryoSat-2 has been operating since 2010, far exceeding its nominal mission lifetime. Actual health data of the Airbus-built 720 kilogram spacecraft triggered programmatic funds to keep it operational until end 2021. Over the last decade the satellite reached an operational availability close to 99 percent and delivered almost 350 Terabytes of data - the equivalent of a 1,400 km long bookshelf. 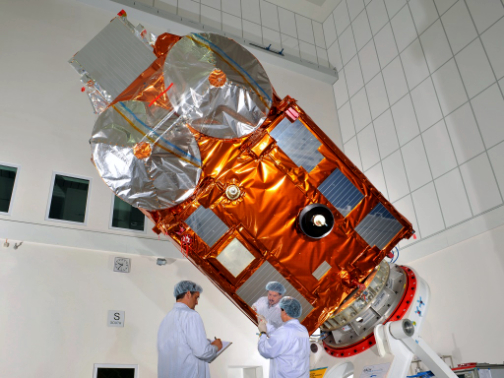 Photo of the CryoSat satellite is courtesy of Airbus.

Over the past 10 years, CryoSat-2 has delivered a wealth of information about Earth's changing ice cover and thickness, and has demonstrated that it is a valuable data source for oceanography, hydrology and geodesy, exceeding expectations with a range of results that go far beyond its original goals. CryoSat-2 has also made remarkable contributions to our understanding of the cryosphere and its effect on Earth’s climate.

A tenth of Earth's land surface is permanently covered by ice sheets or glaciers. The cryosphere is an important regulator of global climate, its bright albedo reflecting sunlight back to space and its presence influencing regional weather and global ocean currents. Some 77 percent of the globe’s freshwater is held within the ice – but the cryosphere appears disproportionately sensitive to the effects of global warming. 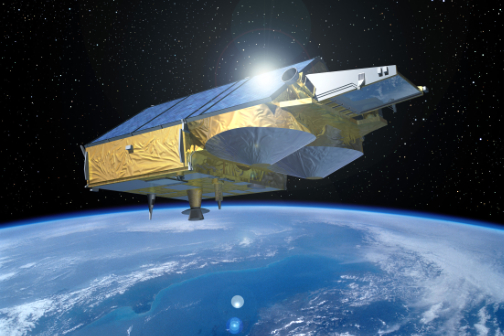 Artistic rendition of CryoSat on orbit. Image is courtesy of ESA.

One example of data provided by CryoSat is that ice losses from Antarctica have increased global sea levels by 7.6 mm since 1992, with two fifths of this rise (3.0 mm) coming in the last five years. Antarctica stores enough frozen water to raise global sea level by 58 metres. Knowing how much ice it is losing, is key to understanding - today and in the future - the impact of melting ice masses on global climate change. Greenland has lost 266 billion tons of ice in a 16 year period.

Another example of the benefits of CryoSat measurements are operational services covering sea ice, wind and waves, bathymetry and iceberg monitoring for maritime purposes. 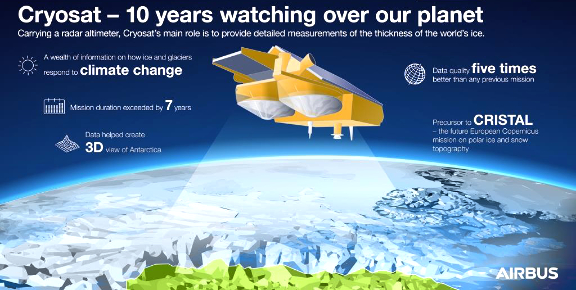 Infographic is courtesy of Airbus.

With this system, an average accuracy of one to three centimeters can be reached. It can also collect data on non-homogeneous ice structures with very steep walls in the polar seas, glaciers or ice sheets. CryoSat's radar altimeter works day and night and can also penetrate cloud cover. Therefore, it is particularly suited to monitoring the large polar ice sheets, which are often covered by clouds.