A series of satellites will be launched by Landspace Technology Corporation of Beijing for the Danish firm, Gomspace. 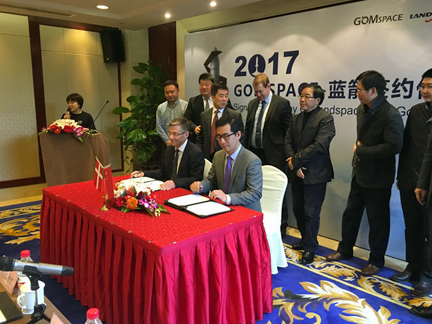 The contract signing between Gomspace and Landspace Technology Corporation.

According to the contract, Landspace will use their Landspace-1 rocket to put Gomspace's satellites into orbit in 2018. Landspace CEO Zhang Changwu said his company could not have won recognition from the overseas client without decades of efforts by Chinese workers in the aerospace industry, which has been developing for 60 years.

GomSpace was founded in 2007 with a mission to be engaged in the global market for space systems and services through the introduction of new products, such as components, platforms and systems, all based on smallsat technology innovations. The company provides cost-effective, reliable subsystems and platform solutions to the expanding smallsat markets as well as develops new products and mission concepts for smallsats.

Additionally, GomSpace implements pre-operational demonstration missions of new nanosatellite based services that can be spun out as individual service businesses. They also provide an extensive portfolio of commercially available off the shelf subsystems and software components for nanosatellites as well as turnkey smallsat projects providing customers with full platform and mission solutions.

The total value of the global aerospace market could hit 485 billion US dollars by 2020, according to market estimates, with the market value in China alone reaching 800 billion yuan (116 billion US dollars) during the 2016-2020 period. Sun Jiadong, an academician of the Chinese Academy of Sciences, said the aerospace industry matters not only for space exploration, but also for economic and social development. The civil aerospace industry has great potential and will grow very quickly, Sun said.