[SatNews] Forcing ULA out of the market would have incredibly destructive consequences for the whole military space program.

If you have been following the controversy surrounding SpaceX’s efforts to break into the military launch market, then you know what founder Elon Musk’s big complaint is: lack of competition.  Up until last week, only one provider of launch services was certified by the Air Force to loft military satellites into orbit.  That provider, a joint venture of Boeing BA -0.32% and Lockheed Martin LMT +0.5% called United Launch Alliance (ULA), has enjoyed a de facto monopoly since its founding in 2006.  Musk says this arrangement invites abuse, and is trying to overturn a 2012 sole-source award of 36 rocket cores to ULA.

(Disclosure: Boeing and Lockheed Martin contribute to my think tank; Lockheed is a consulting client.)

However, if the Senate Armed Services Committee has its way, that monopoly could soon belong to SpaceX.  The California-based company disclosed late last week that it has cleared a key hurdle in the certification process, and meanwhile the Senate panel has drafted legislative language that would effectively bar ULA from the military launch market.  The language is contained in Section 1623 of the Senate version of the 2015 National Defense Authorization Act, and almost nobody on or off Capitol Hill seems to grasp its significance. 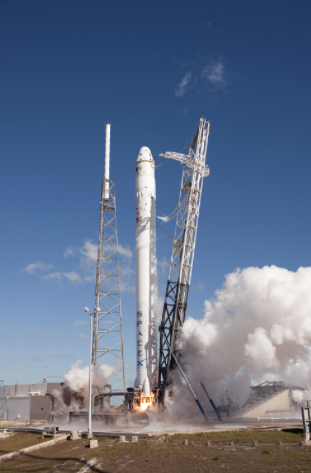 Is this the face of America’s next space monopoly? (Image: Wikimedia)

What it says is that the Secretary of Defense may not enter into a new contract or renew an existing contract under the Evolved Expendable Launch Vehicle program with any person “if that person purchases supplies critical for space launch activities covered by the contract from a Russian entity.”  The Evolved Expendable Launch Vehicle effort is the principal program through which the Pentagon secures launch services for its satellites.  The provision was approved by the full committee to punish Russia for its annexation of Crimea, and it most certainly would do that.  However, if actually signed into law, the Senate language would claim other casualties too.

Here’s why.  ULA, the sole current provider of military launch services, offers two basic launch vehicles: the Atlas V and the Delta IV.  The Atlas employs a Russian first stage for which there is no domestically-built alternative.  The Senate provision would clearly ban further use of that launch vehicle.  In addition, though, ULA would also be precluded from offering its other vehicle, the U.S.-made Delta, because its contract for 36 launches relies partly on Russian launch technology.  ULA would thus be shut out of the market for future military launches, and SpaceX could find itself the beneficiary of a huge windfall.

Needless to say, this is not what the authors of the provision intended.  The provision includes language under which the Secretary of Defense could waive restrictions if the impact on national security was too onerous.  However, that waiver process requires the Secretary to stipulate that there is no alternative to using Russian launch technology available at a “fair and reasonable price,” and SpaceX is well on its way to providing that alternative.  It might not be able to launch the heaviest military satellites, but for many constellations such as GPS III, it would look credible at least on paper.  ULA probably couldn’t survive with the business that was left.

Forcing ULA out of the market would have incredibly destructive consequences for the whole military space program.  Although the joint venture is nobody’s idea of a low-cost provider — the cost of its launches averages $225 million — it has a spotless record of 71 successful launches in 71 tries.  SpaceX has a much shakier track record, and in fact only delivered its first payload to geosynchronous orbit eight months ago.  Entrusting the joint force’s future in orbit to SpaceX would seem a bit premature at this point.  But that’s what the Senate language effectively would do.

Committee members seem to be under the impression their language protects the sole-source award made to ULA in 2012 that would cover most military launches through the end of the decade.  That award was part of a dual-track strategy for assuring access to space by stabilizing demand for ULA vehicles while opening up some launches to competition from newly certified market entrants such as SpaceX.  But what the lawmakers have actually authored is the rationale for a new launch monopoly favoring a far less capable provider.  Their language would produce the exact opposite of the competitive marketplace Senate space experts say they are seeking.

Fortunately, the committee language hasn’t been approved yet by the full chamber, and if it is it still has to go to conference with the House of Representatives so that the two bills can be reconciled.  That might not happen until after the November elections.  But the fact that such far-reaching language could make it this far in the legislative process without anyone noticing the likely impact is appalling.  It raises the question of how the federal government can ever hope to operate effectively if its most important technology franchises are dealt with in such a haphazard fashion.

This commentary was posted by Loren Thompson a contributor in Forbes and can be found here.

SatNews Note: some of this information was reported in SatNews.com