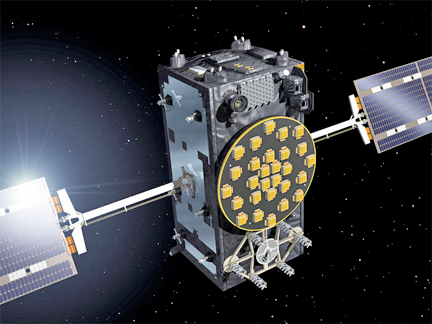 The definition, development and in-orbit validation phases of the Galileo program were carried out by ESA and co-funded by ESA and the EU.

Despite the non-nominal orbit, the satellites are safely under control after they were released from the launcher upper stage and their orbital position was determined by the European ground teams deployed at ESOC in Darmstadt, Germany.

Controllers there, in cooperation with the satellite manufacturer OHB, confirm the good health and the nominal behavior of both satellites. A procedure to deploy the solar arrays that had remained partially folded on both satellites was successfully executed on the first satellite in the course of Monday night. A similar procedure will be executed soon on the second satellite.

Both satellites continue to be kept in a safe state, correctly pointing to the Sun, properly powered and fully under control of the ESA/CNES integrated team and the teams of OHB deployed at ESA’s control center. In parallel, the teams are investigating the possibilities to exploit the satellites to their best despite the non-nominal injection orbit and within the limited propulsion capabilities of the satellites.

[SatNews—Original Posting]  Following the major anomaly that occurred on August 22, 2014 during the Soyuz ST mission carrying two satellites in the Galileo constellation, Arianespace announced today, in conjunction with the European Space Agency (ESA) and the European Commission, the appointment of an independent inquiry commission.

The commission is chaired by Peter Dubock, former ESA Inspector General. Its mandate is to establish the circumstances of the anomaly, to identify the root causes and associated aggravating factors, and make recommendations to correct the identified defect and to allow for a safe return to flight for all Soyuz launches from the Guiana Space Center (CSG).

The commission will start its work on August 28, 2014 and submit its initial conclusions as early as September 8, 2014.

To maintain links with the Russian partners in the Soyuz at CSG program, the head of the Russian space agency Roscosmos, on request from the head of Arianespace, has designated Alexander Daniliuk, Deputy Director General of TsNIImash, as board liaison.

Arianespace Chairman and CEO Stéphane Israël said, "I would like to thank Peter Dubock for having accepted the chairmanship of this commission, which was appointed in conjunction with ESA and the European Commission and with the support of the space agencies from France (CNES), Germany (DLR) and Italy (ASI), along with a team of high-level European experts. The commission will now be able to carry out its work independently, operating under a very tight schedule. We sincerely hope that the commission's recommendations will lead to a rapid resumption of missions, while ensuring the high reliability expected of our Soyuz launches from CSG."

The original story regarding the anomaly...

[SatNews] On August 22, 2014, at 9:27 am local time in French Guiana, a Soyuz ST rocket lifted off with the first two satellites in the Galileo constellation. 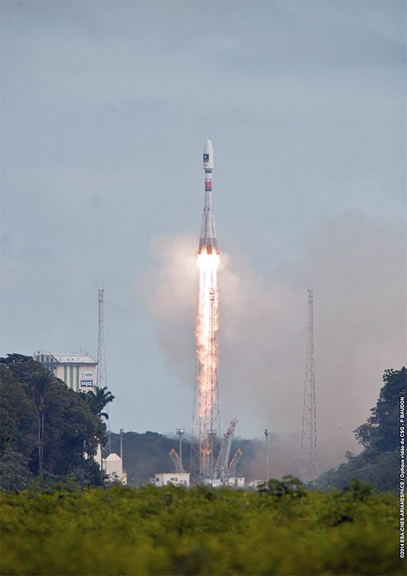 The Soyuz launch of the twin Galileo satellites.

The liftoff and first part of the mission proceeded nominally, leading to release of the satellites according to the planned timetable, and reception of signals from the satellites. It was only a certain time after the separation of the satellites that the ongoing analysis of the data provided by the telemetry stations operated by the European Space Agency (ESA) and the French space agency CNES showed that the satellites were not in the expected orbit.

Both the Fregat upper stage and the two satellites are in a stable condition and position that entails absolutely no risk for people on the ground. The residual propellants on the Fregat stage have been purged and the stage was depressurized normally.

According to the initial analyses, an anomaly is thought to have occurred during the flight phase involving the Fregat upper stage, causing the satellites to be injected into a non-compliant orbit.

Studies and data analyses are continuing in Kourou, French Guiana, and at Arianespace headquarters in Evry, near Paris, under the direction of Stéphane Israël, Chairman and CEO of Arianespace, in conjunction with the Russian partners in the Soyuz in French Guiana program (Russian space agency Roscomos and the manufacturers RKTs-Progress and NPO Lavotchkine), as well as Arianespace's customer ESA and its industrial partners, to determine the scope of the anomaly and its impact on the mission.

"Our aim is of course to fully understand this anomaly," said Stéphane Israël, Chairman and CEO of Arianespace. "Everybody at Arianespace is totally focused on meeting this objective. Starting Monday, Arianespace, in association with ESA and the European Commission, will designate an independent inquiry board to determine the exact causes of this anomaly and to draw conclusions and develop corrective actions that will allow us to resume launches of Soyuz from the Guiana Space Center (CSG) in complete safety and as quickly as possible. The board will coordinate its work with Russian partners in the Soyuz at CSG program. Arianespace is determined to help meet the European Union's goals for the Galileo program without undue delay. We would like to thank ESA, the European Commission and CNES for the very productive discussions since becoming aware of the occurrence of the anomaly. While it is too early to determine the exact causes, we would like to offer our sincere excuses to ESA and the European Commission for this orbital injection that did not meet expectations."

The European Space Agency infosite is reachable at http://www.esa.int/ESA