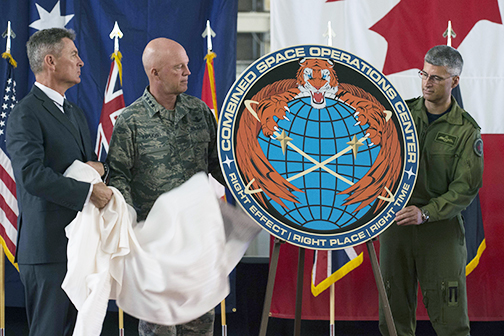 U.S. Air Force Gen. Jay Raymond, commander of Air Force Space Command and Joint Force Space Component, U.S. Strategic Command, presides over a ceremony establishing the Combined Space Operations Center (CSpOC) at Vandenberg Air Force Base, California, July 18, 2018. Representatives of Australia, Canada, and the United Kingdom joined Raymond in marking the transition of the Joint Space Operations Center (JSpOC) to the CSpOC. The change is designed to enhance coordination and cooperation between the U.S. and its allies in safeguarding the space domain.Photo is courtesy of the U.S. Air Force — Dave Grim.

In 2017, U.S. Air Force General John Hyten, U.S. Strategic Command commander, directed the transition that is designed to improve coordination between the U.S., its allies and commercial and civil partners for defensive space efforts to enhance individual and collective space capabilities in order to expand the overall multi-domain military effectiveness. 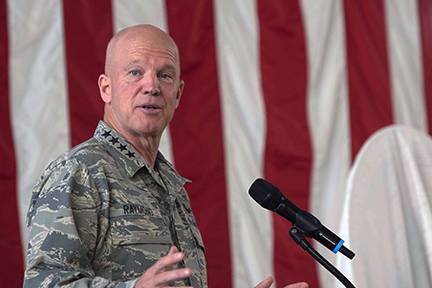 The CSpOC will provide input to develop and improve the ability to rapidly detect, warn, characterize, attribute, and defend against disturbances to space systems. The center will help to increase the resilience of the combined space enterprise and support the delivery of space-based capabilities for allies, partners and other responsible space-faring nations. These space capabilities allow decision makers to see the battlespace with clarity, strike with precision, navigate with accuracy, communicate with certainty, and operate with assurance over global distances.

Space is a warfighting domain, just like air, land, maritime and cyber. Strong partnerships are vital to tempering the would-be designs of those who might attack other nations. The CSpOC positions the U.S. and allied space forces to deter conflict from extending into, or starting in space; and, should deterrence fail, to fight and win.

General Raymond said there’s never been a more exciting time for the combined team to come together. The establishment of the CSpOC is just the beginning, as the USAF's CSpOC family will continue to grow as opportunities to work together with like-minded nations are realized.No one nation can do this alone — the partnerships being formed today will no doubt lead to a more stable and sustainable space domain for years to come. Today is a special day for the space community and I am proud of what has been achieved in the past and am excited to see where the CSpOC will go from here.