ASTROSCALE's Satellite is a Kind of Magnetic Garbage Can

A garbage collecting satellite using magnets to draw in dead satellites is the concept shared as a life-sized satellite was revealed by this Singapore company.

A Singapore-based venture company aspiring to enter the space business unveiled a life-sized model of a satellite that would retrieve space debris, with which the company plans to conduct a test run in orbit in 2019 and to make commercially viable by 2020.

"Space is filled with trash, and if things continue as they have, space exploration will no longer be sustainable. There definitely is demand (for the craft)," Mitsunobu Okada, the 44-year-old founder and CEO of Astroscale, said. Okada also revealed that his company has just accepted a 2.8 billion yen (about $2 million) investment from ANA Holdings Co. and other investors. 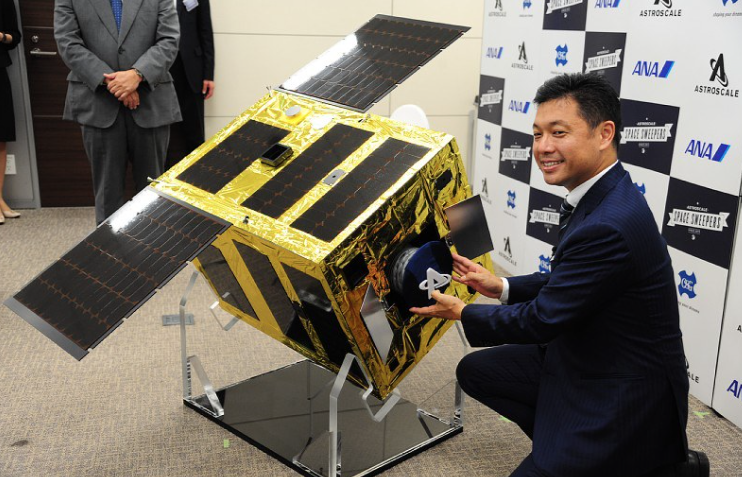 Astroscale founder and CEO Mitsunobu Okada uses a model of the company's new debris-retrieval satellite to explain how the device would collect space trash, in Tokyo's Chiyoda Ward on July 14, 2017. (Mainichi)

Most orbital debris is old satellites and satellite components. Around 750,000 pieces of space debris at least 1 centimeter in diameter are said to be in near-Earth orbit, and are interfering with countries' and companies' efforts to place new satellites.

Astroscale's debris retrieval satellite closes in on dead satellites, and uses magnets to draw them in. The device then enters the atmosphere, bringing the out-of-commission satellite with it, and burns up on re-entry.

If a party enters into a contract with Astroscale—which will guarantee a satellite retrieval method—before they launch their satellites, the party will also get a discount.

The space around the Earth is becoming clogged with an ever-increasing volume of trash, all of it moving at least 7 kilometers per second, posing a danger to humankind's space activities. As newly developing countries have entered the space business with large numbers of microsatellites in recent years, tackling space debris is an urgent task.

For example, in 2009 an out-of-commission Russian military satellite and a satellite launched by a U.S. corporation collided. The International Space Station (ISS) is frequently forced to change course or have its crew members evacuate from their posts. In 2007, China destroyed one of its own satellites with a missile, producing large volumes of orbital shrapnel and triggering international criticism.

Also in 2007, the United Nations Committee on the Peaceful Uses of Outer Space (COPUOS) drafted the Space Debris Mitigation Guidelines, which recommends that satellites that are past their usefulness promptly leave their orbits. However, satellites and satellite parts that have already become space debris have uncoordinated trajectories, and because there is no established method of retrieving such litter, various countries and companies have been searching for a solution.

The Japan Aerospace Exploration Agency (JAXA) is working on a plan to attach metallic string to space debris, through which it would pass electric currents and use the Earth's magnetic field to slow down the debris, and then drop them into the atmosphere. Meanwhile, the RIKEN research institute announced in 2015 that it had devised a method of using high-intensity lasers to slow down "drifting" litter so that they would hurtle into the atmosphere.

Researchers both within and outside Japan have proposed various other ideas, including making space debris attach to operating satellites and catching space debris with nets.