[SatNews] DARPA and the Office of Naval Research (ONR) recently signed a Memorandum of Agreement (MOA) on a joint DARPA/Navy research and development program called “Tern.” 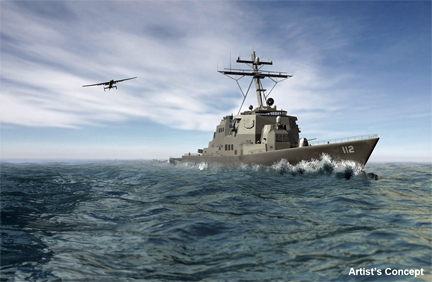 Artistic rendition of a "Tern" in flight.

Image courtesy of DARPA / US Navy

This joint effort builds upon the existing work of DARPA’s Tactically Exploited Reconnaissance Node program, or “TERN,” which has been exploring concepts for a long-endurance and long-range aircraft that would operate from a variety of Navy ships. Modern warfare requires the ability to conduct airborne intelligence, surveillance and reconnaissance (ISR) and strike mobile targets anywhere and at any time. Current technologies in these areas, however, have their limitations. Helicopters are relatively limited in their distance and flight time, and long-distance fixed-wing manned and unmanned aircraft require either aircraft carriers or large, fixed land bases for takeoff and landing.

To help overcome these challenges, the Tern program envisions using smaller ships as mobile launch and recovery sites for medium-altitude, long-endurance unmanned aerial systems (UAS). The goal is to provide long-range ISR and other capabilities from the decks of forward-deployed small ships. The program aims to advance technology to enable a full-scale, at-sea demonstration of an R&D prototype UAS from a vessel with the same deck size as an Arleigh Burke-class destroyer.

“Having a signed agreement with a military Service at the outset of a program is an ideal approach to align objectives,” said Daniel Patt, DARPA program manager for the Tern program. “Ideally, this collaboration with ONR could serve as a model for similar agreements with all the Services for other DARPA programs, and help create breakthrough capabilities for military users.”

The Navy is providing a deputy program manager for Tern.

The first two phases of the program focus on preliminary design and risk reduction for the Tern system. Five performers are currently under contract for Phase 1. One or more of these performers may be selected to continue in Phase 2. In Phase 3, one performer would be selected to build a full-scale demonstrator Tern system for ground-based testing, culminating in an at-sea demonstration of launch and recovery.

The DARPA infosite is located at http://www.darpa.mil/

The Office of Naval Research's infosite may be reached at http://www.onr.navy.mil/