[SatNews] Altogether, 1,000 films are being shown at Berlinale. About 60 percent of the film material is being delivered as Digital Cinema Packages (DCP).

For the second time, Rohde & Schwarz DVS GmbH is supporting the Berlin International Film Festival (Berlinale). As Digital Cinema Partner, DVS and its systems enable efficient workflows to be created covering video ingest and storage through to Digital Cinema Packages generation and validation.

Again this year, Rohde & Schwarz DVS GmbH (DVS) is Official Supplier of the Berlin International Film Festival (February 6 - 16, 2014). The Hanover-based company provides three mastering stations CLIPSTER® as well as one flexible storage solution SpycerBox Flex to ensure that the workflows are efficient and the quality of the moving images is flawless. 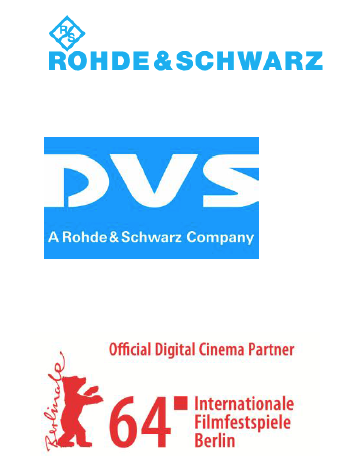 Altogether, 1,000 films are being shown at Berlinale. About 60 percent of the film material is being delivered as Digital Cinema Packages (DCP), the rest is available in other data formats or even as tape. In order to handle this enormous amount of data, the DVS CLIPSTER® Mastering Station offers considerable advantages to the Berlinale with its range of formats, versatility and reliability. As CLIPSTER® supports a wide range of formats, films that have been submitted digitally can be converted and processed quickly; furthermore, the Mastering Station enables high-quality Digital Cinema Packages (DCPs) to be generated faster than in real-time. Last-minute adjustments to films, such as subtitle changes, are also possible using CLIPSTER®.

SpycerBox Flex serves as central storage solution and guarantees the reliable, quick and continuous back-up of the data. Thanks to its multitude of interfaces, the SpycerBox can be integrated seamlessly into the existing infrastructure at Berlin International Film Festival.

Ove Sander, Technical Manager - Digital Cinema, Berlin International Film Festival: “Again this year, our work processes run a lot easier thanks to the DVS systems. One of the major advantages of the mastering station CLIPSTER® is its speed. It plays a major role in helping us to achieve the incredible amount of created DCPs.”

Michael Bauer, Sales Engineer DVS DACH, Central Europe: ”We are delighted to support the Berlinale for the second time, now  as Digital Cinema Partner. The film office is confronted with a large amount of data that need to be processed prior to the festival’s opening. This is where CLIPSTER® comes in—we are offering a unique cinematic experience to the Berlinale visitors.“