NASA's Scientists' Sighs Of Relief For Twins, Ebb And Flow 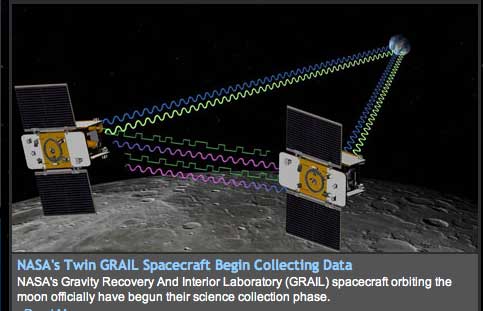 [SatNews] "But it is also a time where we have to put the coffee pot on, roll up our sleeves and get to work."

NASA's Gravity Recovery And Interior Laboratory (GRAIL) spacecraft orbiting the moon officially have begun their science collection phase. During the next 84 days, scientists will obtain a high-resolution map of the lunar gravitational field to learn about the moon's internal structure and composition in unprecedented detail. The data also will provide a better understanding of how Earth and other rocky planets in the solar system formed and evolved.

"The initiation of science data collection is a time when the team lets out a collective sigh of relief because we are finally doing what we came to do," said Maria Zuber, principal investigator for the GRAIL mission at the Massachusetts Institute of Technology in Cambridge. "But it is also a time where we have to put the coffee pot on, roll up our sleeves and get to work."

The GRAIL mission's twin, washing-machine-sized spacecraft, named Ebb and Flow, entered lunar orbit on New Year's Eve and New Years Day. GRAImL's science phase began yesterday at 8:15 p.m. EST (5:15 p.m. PST). During this mission phase, the spacecraft will transmit radio signals precisely defining the distance between them. As they fly over areas of greater and lesser gravity caused by visible features such as mountains, craters and masses hidden beneath the lunar surface, the distance between the two spacecraft will change slightly. Science activities are expected to conclude on May 29, after GRAIL maps the gravity field of the moon three times.

"We are in a near-polar, near-circular orbit with an average altitude of about 34 miles (55 kilometers) right now," said David Lehman, GRAIL project manager from NASA's Jet Propulsion Laboratory (JPL) in Pasadena, Calif. "During the science phase, our spacecraft will orbit the moon as high as 31 miles (51 kilometers) and as low as 10 miles (16 kilometers). They will get as close to each other as 40 miles (65 kilometers) and as far apart as 140 miles (225 kilometers)."

Previously named GRAIL A and B, the names Ebb and Flow were the result of a nation-wide student contest to choose new names for the spacecraft. The winning entry was submitted by fourth graders from the Emily Dickinson Elementary School in Bozeman, Mont. Nearly 900 classrooms with more than 11,000 students from 45 states, Puerto Rico and the District of Columbia, participated in the contest.