[Satnews] In terms of pure in-service units, no less than 56 percent of all satellite based M2M/IoT devices are used for Land Transport, 1.2 million units doubling to 2.4 million units by 2024...

Historically, satellite telecom has been a somewhat slow-moving industry, with a comparatively insulated demand bubble propelled forward by incremental increases in metrics like channel counts and data rates for Enterprise VSATs and the like. M2M has been no exception, with this application seeing clients generally limited to MSS pushing up throughput requirements by a factor of Kbps or occasionally single-digit Mbps. However, there has been much talk about the ‘Connected Car’ changing this. Will this be enough to re-imagine Land Transport M2M as we know it, or is it just more buzz than substance?

In NSR’s recently published report M2M and IoT via Satellite, 6th Edition, the much requested Land Transport segment is included for the first time, which includes rail, road, trucks and cars, with NSR having identified this segment as contributing over $370 million of retail service revenues as of end of year 2014, representing over 32 percent of global satellite M2M/IoT retail service revenues. By 2024, its share will increase to almost 37 percent, or $854 million. 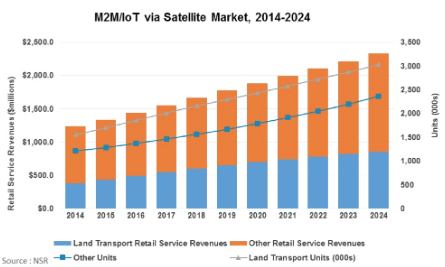 In terms of pure in-service units, no less than 56 percent of all satellite based M2M/IoT devices are used for Land Transport, 1.2 million units doubling to 2.4 million units by 2024.

ARPUs are likewise expected to increase in the medium-term, despite significant competition in the form of cellular connections, as more customers shift from “dots on a map” to more big data type analytics, which will drive up data usage in terms of polling for more data, more frequently. At the moment, the vast majority of these devices are used purely for narrowband location tracking…and nothing more, and this is putting all of this data in a communication ‘silo’.

Requirements however, are gradually increasing in complexity, driving an ever greater dependency on knowing where everything is at all times, especially for high value cargo transport, where margins are highest. The market is gradually moving from a communications silo to the end-game of satellite-based cloud computing. While currently more or less limited to North America and Western Europe, NSR believes that in the long-term, it will be a global trend offering returns for years to come. As such, M2M operators need to invest now in order to reap the rewards of future M2M/IoT plays, specifically as it relates to capacity and, perhaps more critically, software and integration

This all is pushing satellite M2M/IoT players further down the value chain, with a number of high profile acquisitions by operators to integrate vertically and become a one stop shop for customers, increasing margins for operators in the process. Orbcomm has been the most active when it comes to acquiring companies to become more vertically integrated, with multiplecompanies acquired in the past year.  Furthermore, being in control of the management platform and cloud computing will be key to keeping these higher margin retail revenues, as management platforms are highly susceptible for new entrants, most notably Apple and Google entering the mix, especially when it comes to the consumer automotive sector.

Although the consumer oriented Connected Car captures much of the buzz of the M2M/IoT market, this will remain a cellular play for the foreseeable future. That said, some limited opportunities do exist, and will really be extensions of the use cases of M2M/IoT in the market today – location tracking, meter reading, and telematics. Currently this remains cost prohibitive, especially if one includes all of the features consumers desire for a fully integrated Connected Car, such as a satellite driven Wi-Fi hotspot.

However, with over one billion cars on the road today, even if just a small percentage of the future Connected Car market uses satellite terminals, this has the potential to become a large revenue driver longer-term. However, flat panel antennas will be key to takeup, with Kymetaworking directly on the issue with Toyota to improve take up rates of satellite connected cars, and also with Intelsat on building a complete mobility solution.

The Land Transport sector is the largest and most critical satellite M2M/IoT application, and wherever the Land Transport market goes, this will have ramifications for the entire satellite based M2M/IoT market. There are no new ‘game changers’ expected in the market, with the Connected Car expected to stay a niche market in terms of satellite connectivity. However, complexity is increasing, so operators will need to keep up their investments in M2M/IoT networks and services to be able to accommodate the increasing data polling and bandwidth requirements; all the while migrating all traffic to encrypted communications, which needs to be built into the protocol.