[SatNews] The latest in Europe’s series of Sentinel Earth observation satellites landed at French Guiana today in preparation for its orbiting on an Arianespace Vega vehicle during June, while build-up of the lightweight launcher was initiated at the Spaceport this week. 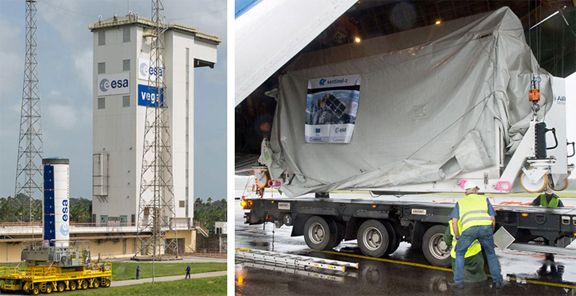 Vega’s first stage is moved to the Spaceport’s ZLV launch site (photo at left), while the protective shipping container with Sentinel-2A is unloaded from the Antonov An-124 cargo jetliner after its arrival at Cayenne’s Félix Eboué Airport.

Sentinel-2A was delivered by a chartered Antonov An-124 cargo jetliner that touched down at Cayenne’s Félix Eboué Airport, where the spacecraft’s protective shipping container was unloaded along with support equipment for transfer by road to the Spaceport. To be orbited on Arianespace’s Flight VV05, this 1,140 kg. satellite will deliver high-resolution optical images from around the globe, becoming part of Europe’s Copernicus initiative that is headed by the European Commission in partnership with the European Space Agency. Copernicus is one of the most ambitious Earth observation programs to date, established to provide accurate, timely and easily-accessible information for improved management of the environment, to better understand and mitigate the effects of climate change, as well as to ensure civil security. 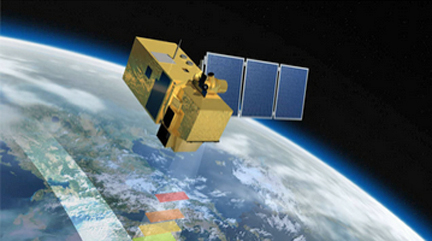 Artistic rendition of the Sentinel 2A satellite.

Airbus Defence and Space is the Sentinel-2A prime contractor, with the satellite designed to supply optical images ranging from the near-visible to the shortwave infrared regions of the electromagnetic spectrum.

Sentinel-2A’s launch is targeted for June 11 on the fifth flight of a Vega from the Spaceport. The satellite will join Sentinel-1A, orbited in April 2014 by an Arianespace medium-lift Soyuz vehicle, and which carries an advanced radar instrument for all-weather, day-and-night imaging of the Earth’s surface.

Assembly of the Vega for Arianespace’s Flight VV05 with Sentinel-2A was initiated at the Spaceport this week, as the vehicle’s first stage was rolled out to the launch zone. The first stage is powered by a P80 advanced solid propellant motor, and has now been positioned on the pad at the Spaceport’s ZLV launch site – initiating the vertical build-up process for Vega.