Lockheed Martin [NYSE: LMT] announced that Steve Wozniak, Apple Computer, Inc. co-founder and Fusion-io chief scientist will deliver the opening keynote address at MILCOM 2010. As the premier international conference for military communications, MILCOM brings together leaders from government, industry and academia to discuss and showcase the latest advancements in military communications and networking. 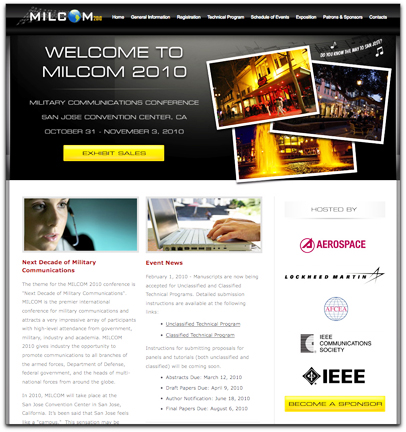 MILCOM 2010 homepage...
This year's conference takes place from October 31 to November 3, 2010 at the San Jose Convention Center in San Jose, California. Lockheed Martin and the Aerospace Corporation are serving as corporate hosts, in coordination with conference co-sponsors the Armed Forces Communications & Electronics Association (AFCEA) and the Institute of Electrical and Electronics Engineers (IEEE) Communications Society.

"Steve Wozniak is a renowned technology leader and innovator, and we are pleased he will kickoff MILCOM 2010," said Joanne Maguire, executive vice president, Lockheed Martin Space Systems and co-general chair of the conference. "For industry, government and other stakeholders involved in communications technologies, MILCOM 2010 is the single must-attend event where we will gather to shape the future of military communications."

A Silicon Valley icon and philanthropist for more than 30 years, Steve Wozniak has helped shape the computing industry with his design of Apple's first line of products, the Apple I and II, and influenced the popular Macintosh. In 1976, Wozniak and Steve Jobs founded Apple Computer Inc. with Wozniak’s Apple I personal computer. The following year, he introduced his Apple II personal computer, featuring a central processing unit, a keyboard, color graphics, and a floppy disk drive. The Apple II was integral in launching the personal computer industry. In 2000, Wozniak was inducted into the Inventors Hall of Fame and was awarded the prestigious Heinz Award for Technology, The Economy and Employment for single-handedly designing the first personal computer and for then redirecting his lifelong passion for mathematics and electronics toward inspiring of excitement for education in grade school students and their teachers. Wozniak currently serves as Chief Scientist for Fusion-io and is a published author with the release of his New York Times best selling autobiography, "Woz: From Computer Geek to Cult Icon" in September 2006 by Norton Publishing.