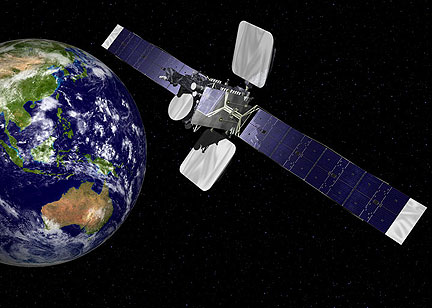 Artistic rendition of the Intelsat-18 satellite, courtesy of Orbital Sciences
[SatNews] The satellite, designed for 15 years of service life, will be driven into orbit by a Zenit-3SLB...

Sea Launch AG will launch the Intelsat 18 (IS-18) communications satellite in the second half of 2011 under a contract with Intelsat. Built by Orbital Sciences Corporation, IS-18 is one of ten STAR GEO communications satellites ordered by Intelsat and will carry a C- and a Ku-band payload and will be located in an orbital slot at 180 degrees East. IS-18 will have a launch mass of 3,200 kg (7,055 lb.) and is designed for 15 years of service. IS-18's C-band payload will serve Eastern Asia, the Pacific and the Western United States and its Ku-band payload will serve French Polynesia, Eastern Australia and the United States. The satellite will be lofted to an optimized geosynchronous transfer orbit using the reliable Zenit-3SLB vehicle launching from Site 45 at the Zenit Launch Complex located within the Baikonur Cosmodrome in Kazakhstan. We are most pleased that Intelsat came to Sea Launch to provide the launch solution for IS-18,” said Kjell Karlsen, president of Sea Launch. “This decision reflects our customer’s continued confidence in our renewed capabilities to provide quality launch services on schedule and with maximum flexibility.”