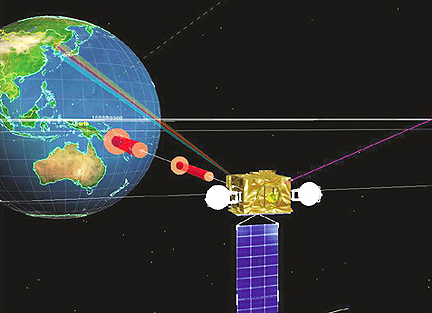 An artist's impression of the weather satellite Cheollian entering its target orbit /Courtesy of the Ministry of Education, Science and Technology
SatNews — Korea's first communication, ocean, and meteorological satellite successfully entered its target geostationary orbit 35,786 km above the Earth at 10:10 p.m. on Monday, eight days after it was launched from the space center in Kourou, French Guiana on June 27th, the Ministry of Education, Science and Technology said on Tuesday. The multi-purpose satellite, dubbed Cheollian, was developed jointly by the Korea Aerospace Research Institute and France's EADS Astrium. It will observe the weather and ocean currents and also provide satellite communication services. With the Cheollian reaching geostationary orbit, Korea became the seventh country in the world to have its own weather satellite. Korea had, so far, relied on weather data from Japanese and U.S. satellites. A ministry spokesman said the Cheollian is exchanging communications with three Earth stations overseas under France's control. On Saturday, the Korean Earth station will take control. After various functional checks, it will start full-time services in December. (Source: The Chosun IIlbo)