The launch of South Africa’s R26-million Sumbandila microsatellite will now likely take place in late August, most probably on or around August 20, as reported by Keith Campbell in Engineering News. 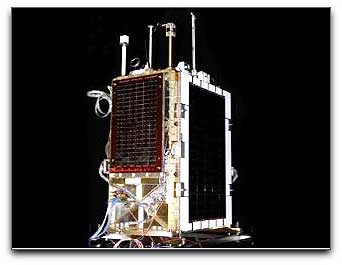 SumbandilaSat will be launched as a secondary payload on a Russian Soyuz launch vehicle, and this latest delay is reportedly because the primary payload for the launch, a Russian Meteor M weather satellite, will not be ready until that date. SumbandilaSat has been designed and built by specialist South African microsatellite company SunSpace and Information Systems (SunSpace), which is based in Stellenbosch in the Western Cape. The microsatellite is currently still in South Africa, and SunSpace needs an export permit for the spacecraft from the South African Space Council before it can be shipped to Russia (even though it is going to remain South African property). This permit is expected to be issued by the end of June and SumbandilaSat will probably be shipped to Russia in late July. It takes approximately 40 days to prepare a satellite for its flight, including its integration on to the topmost stage of its carrier rocket.

SumbandilaSat is an 81 kg Earth observation microsatellite; its name means “lead the way” in the Venda language. It is based around a new satellite platform developed by SunSpace. The microsatellite’s main payload is a 6,25 m multispectral imager — that is, the imager has a resolution of 6,25 m x 6,25 m. This imager was also designed, developed, and made by SunSpace. SumbandilaSat was originally scheduled to have been launched in 2007, from a Russian Navy submarine, on a converted Shtil submarine-launched ballistic missile. As it involved the Russian Navy, this launch would have been under the aegis of the Russian Defence Ministry. However, the arrangement fell through, for reasons that have never been officially divulged. Russia’s civilian space agency, Roscosmos, stepped into the breach, offering the land-based Soyuz launch. It had been hoped that this would take place on March 25 this year, but this had to be postponed to early May, because of the rescheduling of a manned mission. Now, the unreadiness of the Meteor M has caused this further delay. (Photo courtesy of SunSpace)