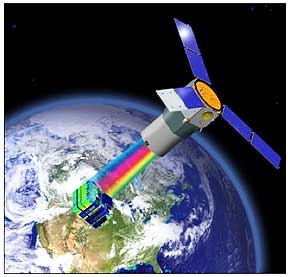 Last Monday, Tactical Satellite-3 completed its critical calibration phase almost three months after launch, and the program team now prepares the 880-pound spacecraft for the crucial validation stage. This stage involves demonstrations of the primary payload, the Advanced Responsive Tactically-Effective Military Imaging Spectrometer, and the two secondary trials, the Satellite Communications Package and the Space Avionics Experiment, occurring the rest of its year-long mission. Administered by the AFRL's Space Vehicles Directorate, TacSat-3 serves as a partnership between the Department of Defense's Operationally Responsive Space office, the Air Force Space and Missile Systems Center's Space Development and Test Wing, the Army Space and Missile Defense Command, the Office of Naval Research, the AFRL's Sensors Directorate and the National Geospatial-Intelligence Agency.

"We opted to continue the calibration phase longer than normal to work through the various tactical modes and fine tune the primary payload's sensor," said Dr. Thomas Cooley, TacSat-3 program manager. "Since we've accomplished that portion of the mission, the program can concentrate on the validation process, which involves employing the three payloads to support tactical-mode collection and processing. Over the coming days, weeks and months, the TacSat-3 project team will work with the Army to exercise tactical collects, as well as with other project partners to test and prove the capabilities of TacSat-3's three payloads," he continued. "From this point forward, our program is focused on conducting experiments and supporting demonstrations with our mission partners. We have reached our goal of having a highly capable TacSat-3 system on orbit."