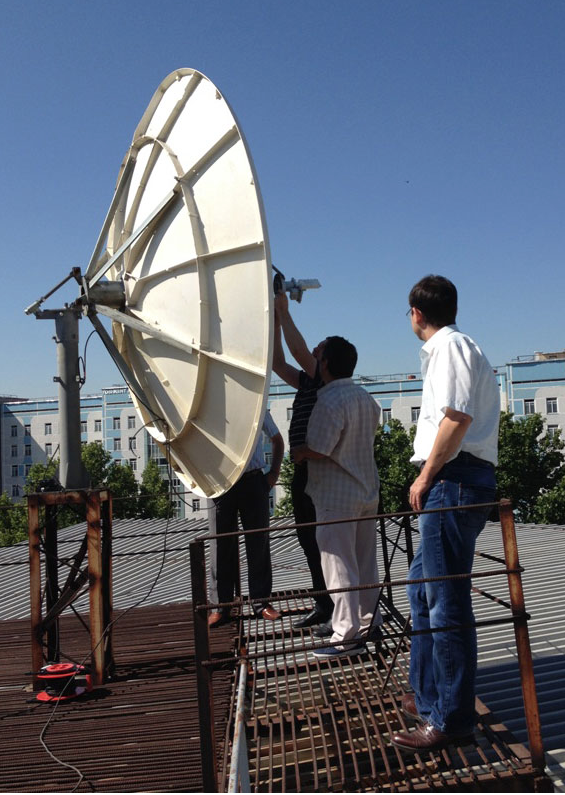 Installation of the new station in Uzbekistan

[SatNews] ...the standard will give a more flexible and affordable implementation, and allow the service to grow without disrupting the existing services for users due to frequent configuration changes.

The information has been developed and redeveloped over the years. New reports daily indicate the service will soon become operational.

On Monday, July 14, there were new stations that followed on from successful installations in Turkmenistan, Kazakhstan, and Kyrgyzstan. Experts from the Turkish State Meteorological Service (TSMS) installed the stations, while forecasters from each national service were trained by EUMETSAT and TSMS.

Speaking at the EUMETSAT Council Meeting in Helsinki Ä°smail GüneÅŸ, General Director of TSMS, said “We are happy to confirm the successful installation of the SADCA stations. The implementation of the project has now concluded.

“Millions of people are now benefiting from high quality Meteosat data for daily weather forecasts.” TSMS and EUMETSAT will provide ongoing support to the users in Central Asia through the EUMETSAT help desk and through software maintenance provided by TSMS.

In August the new DVB-S2 based EUMETCast-Europe service will become operational.

The DVB-S2  (Digital Video Broadcasting) standard is more efficient at using the satellite resources and allows significantly higher throughput on the transponders compared to DVB-S.

Digital Video Broadcast Systems DVBS Inc. is no longer operating, although it had a bright future and had developed many technologies that were far before it's time. The DVBS Livecam video steaming server, Felix, Afterburner web server products and more.

The DVB-S2 standard will give a more flexible and affordable implementation, and allow the service to grow without disrupting the existing services for users due to frequent configuration changes. With the new satellite, additional transponder capacity will also be available to be added when required.

The downlink has been active since early June and the data stream (consisting initially of test data, but now including operational data) can be received by all users. We have been receiving useful feedback from pilot users who have been testing the stream.

Klaus-Peter Renner, Dissemination Operations Team Leader, said: "Pilot users have given us valuable feedback on important issues users may face during the upgrade of their stations. This is a big help for updating the setup guides."

The new EUMETCast Europe will provide two services via DVB-S2:

Regular updates and a full explanation of the migration process can be found in the EUMETCast Technical Bulletin.