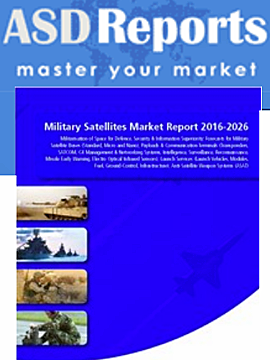 This 270 page report provides 294 tables, charts, and graphs illustrating the most lucrative areas in the industry and the future market prospects. The new study allows readers to assess forecast sales at overall world market, submarket and regional level. Financial results, interviews, trends, opportunities, and revenue predictions are all presented.

Forecasts from 2016-2026 and other analyses reveal the commercial prospects. In addition to revenue forecasting to 2026, this new study provides you with recent results, growth rates, and market shares. There is original analyses, with business outlooks and developments, as well as qualitative analyses (including SWOT analysis), product knowledge and commercial developments.

Individual revenue forecasts for 12 leading national markets from 2016-2026 are offered for:

There will be growth in established Military Satellites markets and in developing countries. The analyses show that the China, in particular, will continue to achieve high revenue growth to 2026. Meanwhile, long-planned satellite modernization programs in the US and France will see them significantly expand their market share. Developments worldwide in Military Satellites technology development will also influence the market.

The report provides detailed profiles of 13 key companies operating within the Military Satellites market: Overall world revenue for Military Satellites will reach $14.37bn in 2016, according to the report's calculations, with steady and increasing revenue growth through to 2026. Identified are which organisations hold the greatest potential...

A number of discussions are included, including qualitative analyses: