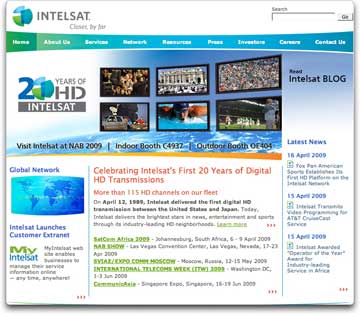 On April 12, 1989, Intelsat delivered the first digital HD transmission between the United States and Japan. Today, Intelsat delivers more than 115 HD channels, brining the brightest stars in news, entertainment and sports to millions of homes throughout the world.

Intelsat will be celebrating its “20 years of HD” with an exhibition at NAB 2009 in Hall C, Booth #4937 and in the Outdoor Pavilion, Booth #E404.  NAB 2009 is the trade show for professionals involved in the creation, management and delivery of content for the broadcasting industry, which is being held at the Las Vegas Convention Center, 20-23 April.
Topical Tags :
Agencies
Consumer Applications
Satellite Operator
Service Provider
Regional Tags :
North America
South/Central America