UPDATE: Arianespace Soyuz to Launch the CNES EyeSat Smallsat and to Deliver ANGELS to Space

Arianespace and the French CNES have signed a launch services contract for the EyeSat smallsat, an astronomy mission that will study zodiacal light as well as image the Milky Way.

EyeSat is a triple cubesat-sized smallsat that is designed to study the zodiacal light and image the Milky Way and has three main objectives: 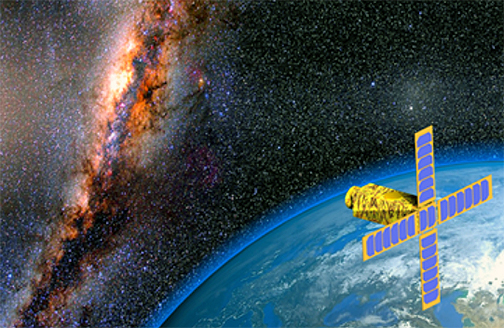 Artistic rendition of the EyeSat smallsat.
Image is courtesy of CNES.

EyeSat will be launched in 2019 as an auxiliary payload with the COSMO-SkyMed Second Generation (CSG 1) and CHEOPS satellites from the Guiana Space Center (CSG) aboard a Soyuz launcher. 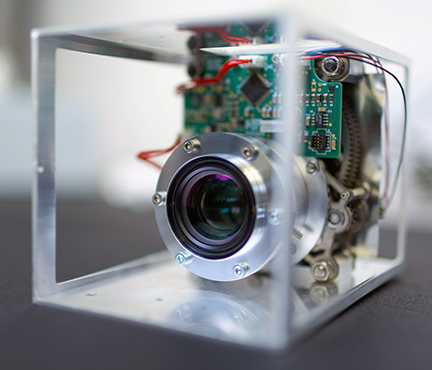 Photo of the IRIS telescope for the EyeSat mission.
Photo is courtesy of CNES.

The smallsat is in the form of a triple (3U) cubesat and is fitted with an instrument called IRIS, which is a small space telescope. The smallsat will have a mass at liftoff of approximately 8 kg. and will be placed in Sun-Synchronous Orbit (SSO) at an altitude of about 500 km.

Following the contract signature, Marie-Anne Claire, Director of Orbital Systems at CNES, said: “Thanks to the EyeSat triple Cubesat, CNES will be able to test in orbit a dozen new miniaturized technologies developed through our research and technology program. We also helped train more than 250 students in space engineering professions. CNES is very pleased that EyeSat will be orbited by Arianespace from the Guiana Space Center.”

Stéphane Israël, Chief Executive Officer of Arianespace, added, “Arianespace is honored to have been chosen by CNES to launch the EyeSat triple Cubesat dedicated to science. Once again we have proven our ability to guarantee independent and competitive access to space for Europe, encompassing satellites of all sizes, thanks to our flexible service offering and our versatile family of launchers.”

There's more... the EyeSat contract for Arianespace is not the only business move just signed... The two firms have also signed a launch contract for the first smallsat completely built by French industry, called ANGELS (ARGOS Néo on a Generic Economical and Light Satellite). 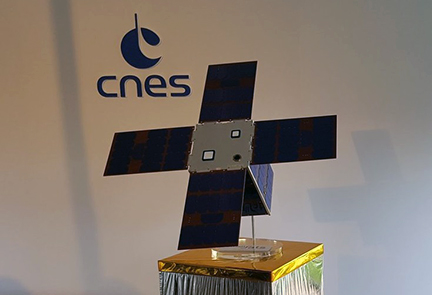 The ANGELS smallsat.
Photo is courtesy of CNES.

ANGELS will be launched as an auxiliary payload with the COSMO-SkyMed Second Generation (CSG 1) and CHEOPS satellites by a Soyuz rocket in 2019 from the Guiana Space Center, Europe’s Spaceport in French Guiana (South America). This mission is jointly financed and developed by the French CNES (Centre National d’Etudes Spatiales) space agency and NEXEYA, an innovative industrial group active in the aerospace, defense, energy, rail and automotive markets.

The satellite will be fitted with a miniaturized ARGOS Néo instrument, which is 10-times smaller than the equivalent previous-generation device. The instrument collects and determines the position of low-power signals and messages sent by the 20,000 ARGOS beacons now in service worldwide. Two project teams — CNES and NEXEYA for ANGELS, and CNES, Thales Alenia Space and Syrlinks for ARGOS Néo — are working together on this French space project.

The ANGELS smallsat will have a liftoff mass of approximately 30 kg. at launch, including its separation device, and will be positioned in Sun-synchronous orbit at an altitude of more than 500 km.

Marie-Anne Clair, CNES Director of Orbital Systems,said that CNES has been committed to miniaturizing satellites for a number of years, in particular through the Proteus mini-satellite and Myriade micro-satellite programs. ANGELS pursues and amplifies this initiative, by paving the way for French industry to build operational nanosatellites within the NewSpace environment.

Stéphane Israël, CEO of Arianespace, added that Arianespace is proud of winning this new contract from CNES to launch ANGELS. Against the backdrop of a dynamic small satellite market, this first nanosatellite from French industry reflects the availability of Arianespace’s services and its ability to adapt to the needs of the market.