[SatNews] System 96L looks like an oval-shaped area of clouds in a recent visible satellite image from the GOES-13 satellite. The National Hurricane Center noted that it now has a 50 percent chance of development into a tropical depression by sometime on Thursday. 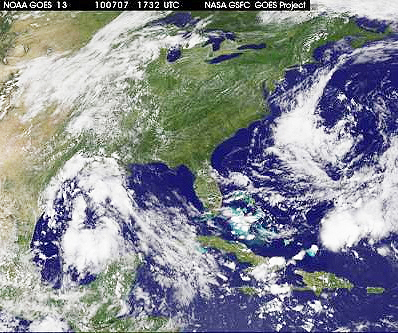 The National Weather Service said that "Conditions appear conducive for development and a tropical depression could form before the system reaches the coast of northeastern Mexico or southern Texas on Thursday." Even if System 96L doesn't develop into a tropical depression, it is still forecast to bring locally heavy rains and gusty winds to portions of eastern Texas and northeastern Mexico during the next few days. Outside of System 96L, tropical cyclone formation is not expected anywhere else in the Atlantic, Caribbean or Gulf of Mexico during the next 48 hours.
Topical Tags :
Agencies
Regulatory/Government
Consumer Applications
Satellite Operator
Service Provider
Regional Tags :
North America
South/Central America