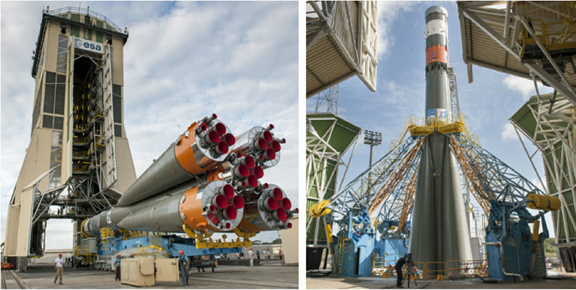 The left photo shows the basic three-stage Soyuz being transferred by rail in a horizontal position from the MIK assembly facility to the launch zone, while at right the medium-lift workhorse has been raised into a vertical orientation as the mobile gantry – which provides protection during the “upper composite’s” integration – is moved into position.

With the rollout and vertical positioning of the basic three-stage vehicle over the launch pad, Arianespace's Soyuz marked another step toward its August 21st mission to deploy the first two FOC (Full Operational Capability) satellites for Europe's Galileo space-based navigation system. In procedures that have become familiar in French Guiana, Soyuz was moved via a transport/erector rail car in a horizontal-transfer process from the MIK launcher assembly facility to the Soyuz launch zone. Once over the launch pad in the Spaceport's northwestern sector, Soyuz was erected into a vertical orientation, where it is suspended by four large support arms. With this step complete the mobile gantry was moved into position over the launcher, providing protection for the subsequent installation of Soyuz' "upper composite"—including the Galileo spacecraft and their dispenser system, the Fregat upper stage and payload fairing.

In separate activity at the Spaceport’s S3B facility, the Galileo mission logos have been applied to the payload fairing – which encapsulates this mission’s two-satellite payload and their dispenser system.

The Galileo program will create a European-operated navigation system providing highly accurate global positioning services through a constellation of 27 operational satellites and three reserves. The European Commission is funding and executing the FOC phase, with the European Space Agency designated as the system's development and sourcing agent.

As the latest launch in Galileo's deployment, Thursday's Flight VS09—which is Arianespace's ninth Soyuz mission from the Spaceport—is scheduled for liftoff at precisely 9:31:14 a.m. local time in French Guiana. Soyuz previously orbited four Galileo IOV (In-Orbit Validation) spacecraft in pairs on missions in 2011 and 2012, as well as two GIOVE (Galileo In-Orbit Validation Element) satellites on flights operated by Arianespace's Starsem affiliate in 2005 and 2008.