[SatNews] The mini-VSAT Broadband service from KVH Industries, Inc., (Nasdaq: KVHI) increased its dominance of the maritime VSAT market according to the latest edition of a report from Euroconsult, the leading global consulting firm specializing in space markets.

“Maritime Telecom Solutions by Satellite: Global Market Analysis & Forecasts, 3rd Edition,” released last week, reports that KVH’s share of the industry’s 11,000 activated maritime VSAT terminals is 26 percent, up from 16 percent two years ago. In the new analysis, KVH’s market share was reported to be double that of its next closest competitor. 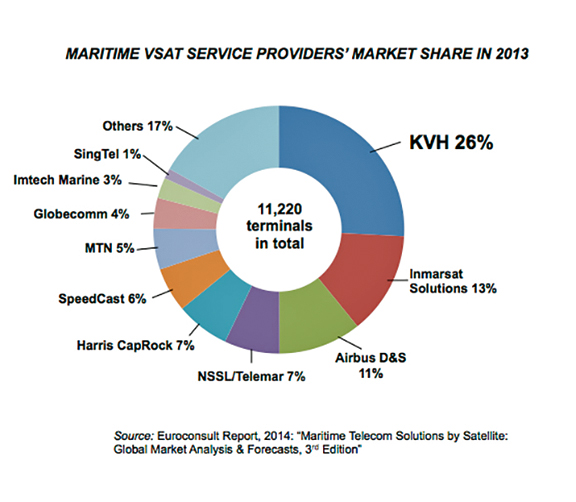 KVH recently shipped its 4,000th TracPhone system for the mini-VSAT Broadband service, which provides satellite Internet and phone services to commercial ships, government vessels, and pleasure yachts around the globe. KVH reported in its 2013 year-end investor conference call that its maritime VSAT service revenues grew by 33 percent in 2013. Euroconsult estimates the overall maritime VSAT market has grown at a 28 percent compounded annual growth rate since 2010, and that by the end of 2023 maritime VSAT services will account for 61 percent of a $1.5 billion maritime communications market.

“The maritime industry has begun to see broadband connectivity as a business necessity, both for operational efficiencies and for crew welfare, and they are looking for fast and affordable solutions to their satellite communications needs,” said Martin Kits van Heyningen, KVH’s CEO. “Our mini-VSAT Broadband service provides that combination, and we are unique in the industry for being the only global player with a true end-to-end solution not only for connectivity and antenna hardware, but also for content. We see content delivery as the next big area of demand from maritime vessels, and we already have a solution.” 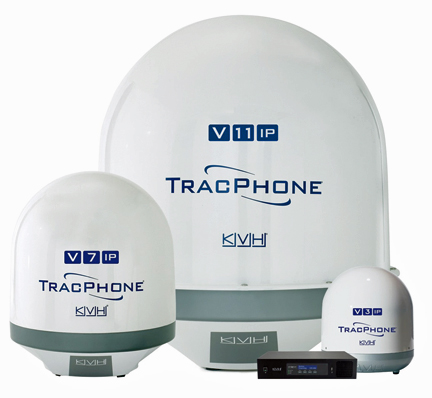 KVH’s V-IP series of satellite communications systems is designed exclusively for use with the mini-VSAT Broadband service.

In response to its increasing customer base worldwide, KVH has more than doubled the capacity of the mini-VSAT Broadband network in the last 12 months by deploying Adaptive Coding, Spreading, and Modulation (ACSM) technology provided by ViaSat, which enables the network to handle transmissions more efficiently and increases the amount of data that can be carried. The mini-VSAT Broadband network uses a combination of 19 Ku-band transponders and 3 C-band beams to provide total global coverage. KVH’s line of antenna systems designed exclusively for mini-VSAT Broadband service includes: the TracPhone V11-IP, a 1.1 meter diameter, dual-mode C/Ku-band antenna for global VSAT connectivity; the TracPhone V7-IP, a 60cm diameter enterprise-grade antenna for Ku-band service worldwide; and the TracPhone V3-IP, a 37cm diameter Ku-band antenna that is the world’s most compact maritime VSAT antenna.

The recent enhancements to the mini-VSAT Broadband network play a key role in KVH’s recently announced IP-MobileCast content delivery service. This service, which is expected to be available later this year, is designed to deliver news, entertainment, sports, and training content directly to subscribing vessels over the top of the mini-VSAT Broadband network using a separate data stream. IP-MobileCast will also deliver operational data such as electronic chart updates and weather information. The IP-MobileCast content will be provided by KVH Media Group, which was formed after KVH’s May 2013 acquisition of Headland Media.

The KVH infosite is accessible via http://www.kvh.com/