The surface of the Sun is never still. Upon this burning ball of gas, a continual flow of super-hot plasma creates ropes of magnetic fields that can twist and tangle with one another.

As the star rotates, these invisible lines snap apart and join together again, bursting into flares, storms and eruptions of plasma. 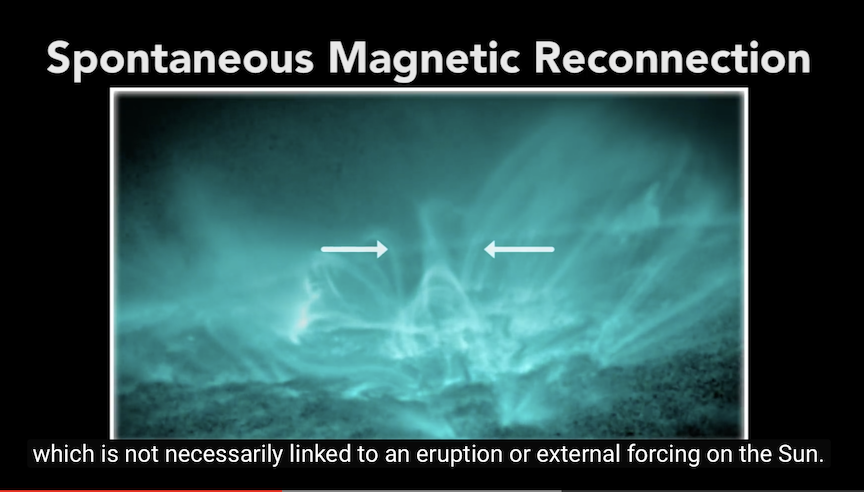 This phenomenon, known as magnetic reconnection, has been seen many times before on the Sun and even around our own planet, but we've only captured spontaneous reconnections in the past.

For the first time ever, astronomers at NASA's Solar Dynamics Observatory have now observed a magnetic explosion on the Sun that was triggered by a nearby eruption — a forced reconnection rather than a spontaneous one.

Launched into the upper reaches of the Sun's atmosphere, this large discharge of solar matter was caught falling back into a web of magnetic field lines, causing them to reconnect with a bang in a distinct X shape.

"This was the first observation of an external driver of magnetic reconnection," says solar scientist Abhishek Srivastava from the Indian Institute of Technology (BHU) in Varanasi, India.

"This could be very useful for understanding other systems. For example, Earth's and planetary magnetospheres, other magnetised plasma sources, including experiments at laboratory scales where plasma is highly diffusive and very hard to control."

The surface of the Sun is unimaginably hot, but strangely enough, its atmosphere is actually 300 times more oppressive.

In the outermost part, known as the corona, magnetic reconnection is thought to play a major role in producing excess heat. But the mechanics of this remain unsettled and are highly debated.

Ideal conditions for this phenomenon are still being teased out, but the new discovery suggests we're on the right track. The forced reconnection event was first hypothesised 15 years ago, and now, we finally know some of the precise circumstances needed for it to occur.

Examining multiple wavelengths of ultraviolet light, astronomers were able to calculate the temperature of the ejected plasma before and after its plummet. This revealed that the eruption of matter was fairly cool before it entered the blistering corona.

It took about an hour for the eruption to fall back down into the magnetic field lines, but once it did, its temperature appeared to surge.

This suggests that forced reconnection can not only heat solar matter, it does so in a much more controlled, quicker and higher manner than spontaneous reconnection.

"Observations in relation to the numerical model reveal that forced reconnection may rapidly and efficiently occur at higher rates in the solar corona," the team writes in their study.

"This physical process may also heat the corona locally even without establishing a significant and self-consistent diffusion region."

While not as prominent as solar flares, this bulk of energy was still enough to form an outflowing of plasma streaks, leading the authors to conclude that the eruption "consumed the energy generated by the forced magnetic reconnection".

The authors think other forms of solar eruption could also force this reconnection, and they are looking for more examples to figure out how often this phenomenon actually occurs on the Sun.

"Our thought is that forced reconnection is everywhere," says Srivastava. "But we have to continue to observe it, to quantify it, if we want prove that."

The study was published in The Astrophysical Journal.