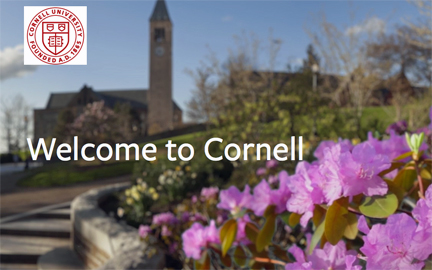 [Satnews] Journalist Noah Rankin, writing in The Cornell Daily Sun, offers the following information regarding a new satellite being designed by Cornell University students for the upcoming NASA Launch competition...

“Shoot for the moon” may be an expression, but for the students working with Professor Mason Peck, mechanical and aerospace engineering, it could also become a reality. Currently in the top five teams participating in the NASA competition known as CubeQuest, the “Cislunar Explorers” are working to create a satellite capable of orbiting the moon that demonstrates new methods of propulsion and navigation through space. 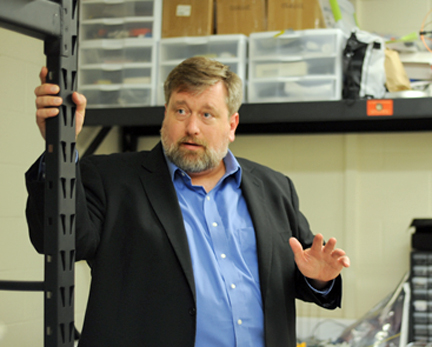 “Ph.D. students and undergraduates with me have the opportunity to engage in basic research that Cornell’s known for and also build something that’s never been flown,” Peck said. “I’m serious when I say flying your senior project is something we do here. And Cornell’s one of relatively few institutions where this is commonplace.”

Hitching a Ride
In 2018, NASA will launch a spacecraft known as the Space Launch System, primarily to test the Orion capsule, which is planned to be the first U.S. human-flight spacecraft since the retirement of the Space Shuttle. According to Kyle Doyle grad, a member of Peck’s team, the SLS will have leftover carrying capacity that NASA intends to use for more “experimental spacecraft.” Among these will include the top three winners of the CubeQuest competition, Doyle said.

“The ‘secondary payload ring,’ they call it, is a ring that has many smaller spacecraft slotted into it. After they deploy the main spacecraft, they’ll shoot these out in a test fleet that tests all sorts of different technologies,” Doyle said. “It’s a very good way for NASA to try many different things at once and not care too much if any of them fail, because it’s not the reason the mission was launched.” 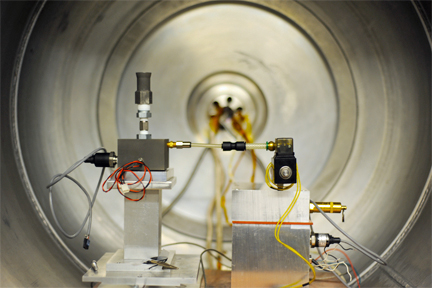 In order to get accurate data for the propulsion system, the test apparatus (pictured) is placed in a thermal vacuum chamber that simulates the pressure of space. The aluminum chamber on the right holds water; electrolyzed oxygen and hydrogen travel through the solenoid valve into the combustion chamber on the right.

According to Doyle, CubeQuest operates as a series of four ground tournaments—one every six months—in which NASA inspects the progress of participating teams’ satellite designs and awards prize money based on a point system. In the first tournament, held in August, Cornell’s team (registered as “Cislunar Explorers,” or “explorers between the Earth and moon”) placed third overall and received $20,000 for placing in the top five. The next tournament will take place in February 2016 and final winners are determined in February 2017.

“For the first ground tournament it was very conceptual; we were actually farther along than we had to be, which is why we got such a high score,” Doyle said. “The second time around they want much more concrete and specific design elements such as the components we’re using. We’re actually ahead of schedule for that so we can come in and say not only have we selected our components, but here are test results; here’s a prototype satellite.”

The competition is broken up into a “Deep Space Derby” and a “Lunar Derby,” Doyle said. The “Lunar Derby,” for which Cornell is competing, focuses around getting spacecraft into lunar orbit and communicating back to Earth.

“After deploying from the big rocket, we’re going to try take our spacecraft and have it move itself into a lunar orbit, and have it go around the moon until it runs out of propellant and eventually crashes,” Doyle said. “So the ground tournaments are the gateway to being offered as spot in space, and there’s a substantial prize for achieving lunar orbit. That’s what we’re ultimately going for, but before we get there we have to hitch a ride into space.”

A Familiar Face
The Cornell satellite consists of two indented, block-like structures that join together to form a rectangular box about the size of a large book. Spring-loaded, the satellite’s components are able to kick away from each other in space, inducing a spin that acts as a centrifuge for the fuel tank. But what’s in the tank? According to Doyle and Emilie Camera ’17, another student on the team, the propellant for the satellite is none other than water, electrolyzed into hydrogen and oxygen during spin to be used as rocket fuel.

“Traditional rockets tend to burn hydrogen gas and/or oxygen gas to propel themselves, so in that sense we are using the same fuel,” Camera said. “The hydrogen and oxygen are usually carefully stored in their gaseous state onboard the rockets. Because of this, they need to be kept at their specific cryogenic temperatures and pressure to avoid premature combustion, leaking, and catastrophic failure. Since we are storing the hydrogen and oxygen in the form of water and electrolyzing as we go, we don’t need to worry about maintaining the temperature and/or pressure of the gases.”

And that’s not the only benefit of water-based propulsion, according to Doyle.

“We’re finding that water is extraordinarily common in the Solar System,” Doyle said. “It makes up the surface of whole moons; our own moon has it hidden in shadowy craters; the rings of Saturn have lots of ice in them. Water is everywhere, so in our line of thinking, that means gas stations are everywhere if you can propel your spacecraft with water.”

In order to get accurate data for the propulsion system, the test apparatus (pictured) is placed in a thermal vacuum chamber that simulates the pressure of space. The aluminum chamber on the right holds water; electrolyzed oxygen and hydrogen travel through the solenoid valve into the combustion chamber on the right. (Brittney Chew / Sun News Photography Editor)

In order to accurately test this apparatus, the satellite—entirely made out of aluminum aside from a titanium piece 3-D printed by Moog, Inc.—is placed in a machine called a thermal vacuum chamber, which can be completely emptied of air so as to simulate space pressure. Placing the current setup of the satellite in the chamber, Camera explained how the oxygen and hydrogen pressure is first measured before being pushed into the combustion chamber, burned and used for thrust.

The other main innovation present on the satellite is its optical navigation system, in which photographs of celestial objects are used as landmarks for orientation. Since the satellite stabilizes itself like a gyroscope, it can point in whatever direction deemed necessary by the team, Doyle said.

“Rather than having GPS, which doesn’t work past lower orbit, we take pictures with three onboard cameras of the Sun, the moon and the earth, and determine which way we’re facing and which way we are based on the relative size and where those three celestial objects appear to be compared with where we know they are,” Doyle said. “It’s very similar by how people used to navigate by celestial objects. It’s very much a case of what’s old is new.”

Personal Space
A major goal for the project has been to increase accessibility for people interested in sending similar, non-government objects into space. According to Peck, these technologies are “within reach of virtually anybody.” 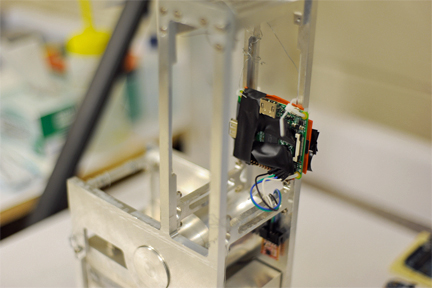 “I think it takes innovation to get them right, but once you get them right, this opens up exploration of the Solar System in a way that we really haven’t been able to do before,” Peck said. “We can launch relatively inexpensive probes, fuel them as we go farther and faster. And with the navigation system, we don’t have to rely on all the expensive resources that NASA usually gives us. So maybe, this is the hobby of the next century — sending out your spacecraft and getting data back.”

Peck, who served as chief technologist at NASA from 2012 to 2013, believes that sending things into space could quickly become a major new business sphere if the technology evolves in the right way.

“If there’s enough consumer use of space—if hundreds, thousands, maybe millions of people or organizations start to explore space on their own for economic or scientific purposes, suddenly the launch opportunities become far more frequent,” he said. “The launch prices come down, because you can now create these rockets in quantity, operate them as batches or fleets as opposed to the customized, exquisite things they are now. It reduces the price of launch, and that helps everybody. That’s one of the exciting things of these technologies—they level the playing field, and open up space for a large number of people.”

Matching this philosophy, the team plans to open-source their satellite design on Github in the coming weeks to share their findings regarding propulsion and navigation systems, according to Doyle.

“The goal is for anyone to download the blueprints and make their own if they wanted to,” he said.

Should the team be worried that other CubeQuest competitors will steal their idea? Peck doesn’t think so.

“Something that distinguishes our team is how far along the project is, well ahead of where we need to be at this point in the competition,” Peck said. “I think we have a unique solution here. If people start to take on what we’ve developed and can make it a common way to explore space I think that’s a great outcome of this.”