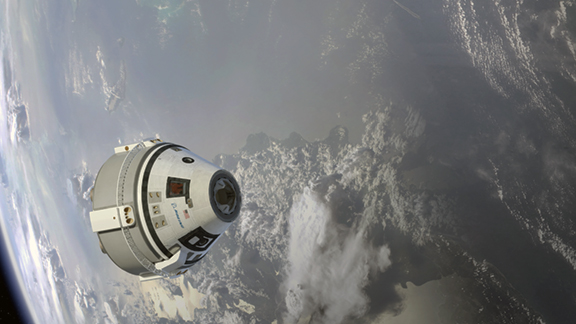 Artistic rendition of a Boeing CST-100 Starliner in Earth orbit.  Image is courtesy of Boeing.

An informative article at TechCrunch is reporting that Boeing’s Starliner CST-100 crew spacecraft was off to a great start on its first-ever launch to the International Space Station this morning, December 20, 2019.

However, reported site writer Darrell Etherington, despite the rocket and launch vehicle performing as expected, the Starliner spacecraft itself hit a bit of a snag when the time came for the start of its own post-launch mission.

The Starliner capsule successfully separated from the ULA Centaur second stage rocket that brought it to its sub-orbital target in space, but when the Starliner was supposed to light up its own engines and propel itself to its target orbit, the requisite burn didn’t happen.

Boeing instead said that the spacecraft achieved a stable position to charge up its solar-powered batteries and that it was working on the ground with its team to figure out what maneuvers come next to get the spacecraft to where it needs to be.

NASA Administrator Jim Bridenstine provided the first substantial update about what went wrong via Twitter at 8:45 AM EST, noting that there was an incident wherein the Starliner spacecraft “believed it was in an orbital insertion burn, when it was not.”

This means the spacecraft's mission clock encountered some kind of bug or error that told the Starliner systems it was at a different point in the mission procedure than it actually should’ve been. As a result, the spacecraft burned more fuel than it was supposed to burn and missed its intended orbital insertion point. The Starliner has subsequently done a second burn and is a stable orbit, but it is no longer capable of reaching the International Space Station as planned.