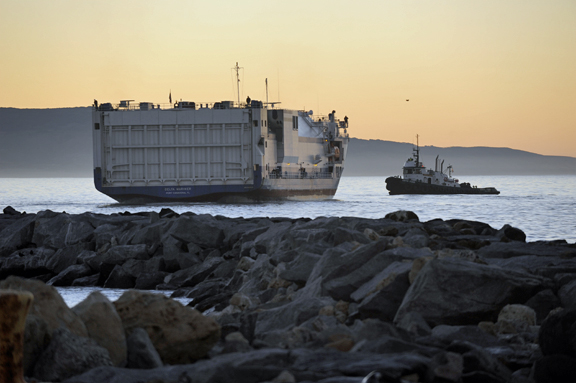 The Delta Mariner made its way from a production facility in Decatur, Alabama, to deliver a Delta IV rocket, scheduled to launch in early 2015.

"Months of work went into the Mariner's arrival, by everyone from the contractors, to ULA, to the base personnel," said Capt. Crystal Hamilton, 4th Space Launch Squadron launch mission manager. The Delta IV that arrived on the Mariner actually traveled from the production facility at Decatur, Alabama, to Cape Canaveral Air Station for initial processing prior to making its way through the Gulf of Mexico, Panama Canal and up the coastline to Vandenberg." Various Air Force personnel were on site at Vandenberg's only dock, which solely exists to accommodate the Mariner's rocket deliveries. Civilian and military members alike will continue to work tirelessly—from the time rocket components arrive piece by piece to the moment the launch payload successfully reaches polar-orbit.

"The Air Force had many different roles in the Mariner's arrival," said Hamilton. "Some of the early work included coordinating and monitoring surveys and dredging to ensure the Mariner would fit into the harbor. Also the safety, weather and security offices are all players during such a massive process. My squadron specifically monitors everything from arrival to the actual launch, to ensure mission assurance and success."

The Delta IV rocket is delivered by boat due to its massive size that inhibits other forms of shipment—and with millions of dollars on the line, extra layers of safety are essential.

"The Delta rocket travels by boat because it's too large to be transported any other way," said Maj. Lawrence Ware, 4th SLS director of operations. "Our role is to provide mission assurance for Evolved Expendable Launch vehicles for the Air Force at Vandenberg. What that means is we work with ULA and monitor their operations to ensure they're complying with the contract set up with the Air Force and we help manage their risk all the way from the hardware arrival to the day of launch when the rocket leaves the pad. It has been a great experience. Nothing is better than being out on the beach, watching the sun come up, and being able to unload a 250 million dollar rocket off the back of a ship. This is definitely one of the highlights of being at this base and not too many people can say they do this for a living."

In addition to the dozens of military and civilian personnel on-site to ensure the successful docking and unloading of the Mariner, numerous members of base were on site to witness the event.

"I think it's important for people to know what they support," said Hamilton. "Most of the base and local community members see and hear the launches but they don't get to see the months of hard work that lead up to that one event. Milestones, like the arrival of hardware, allow members of base to not only see what they are a part of - but also experience it."

The United Launch Alliance infosite may be reached at http://www.ulalaunch.com/