SpaceX's Draco Gets All Fired Up 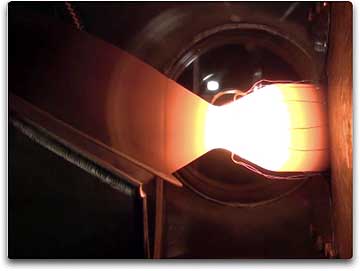 Space Exploration Technologies (SpaceX) successfully completed a rigorous qualification of its new Draco spacecraft thruster and Draco propulsion tank at the SpaceX Test Facility in McGregor, Texas. The Draco thruster test series included 42 firings with over 4,600 pulses of varying lengths and was performed in a vacuum test chamber to simulate the space environment. The series resulted in a total firing time of over 50 minutes on a single thruster. Photo on right: The new SpaceX Draco thruster engine undergoing qualification test firing at the SpaceX Test Facility in McGregor, Texas. The Dragon spacecraft uses a total of 18 Draco thrusters for maneuvering, attitude control, and to initiate the capsule's return to Earth. First flight of the Dragon is scheduled for this year. Credit: SpaceX.

SpaceX's Dragon spacecraft, recently selected by NASA as part of their Commercial Resupply Services (CRS) contract to carry cargo to the International Space Station (ISS) and return cargo to Earth, utilizes 18 Draco thrusters to provide precision control in orbit and while approaching the ISS. 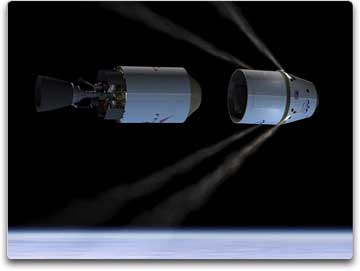 "The Draco thrusters allow Dragon to maneuver in close proximity to the ISS in preparation for berthing or docking," said Tom Mueller VP Propulsion, SpaceX. "Maximum control during these procedures is critical for the safety of the station and its inhabitants."

Graphic on left showing SpaceX Draco thruster engines firing to separate the Dragon spacecraft from the Falcon 9 second stage. Dragon uses a total of 18 Draco thrusters for maneuvering, attitude control, and to initiate the capsule's return to Earth. First flight of the Dragon is scheduled for this year. Credit: SpaceX.

Draco thrusters generate approximately 90 pounds of thrust using storable propellants with long on-orbit lifetimes. The use of these propellants provides the option for a crew-carrying Dragon spacecraft to remain berthed at the ISS for up to a year.

SpaceX's Dragon spacecraft is scheduled to make its first flight in 2009 as part of NASA's Commercial Orbital Transportation Services (COTS) program. Under COTS, SpaceX will demonstrate the Falcon 9/Dragon system's ability to approach, berth, and transport cargo to and from the ISS. Following the demonstration of these capabilities, SpaceX will fly twelve cargo flights to the ISS for NASA's CRS contract. Falcon 9, SpaceX's medium lift rocket, is scheduled for its inaugural flight later this year from SpaceX’s launch site in Cape Canaveral, Florida.

SpaceX is developing a family of launch vehicles and spacecraft intended to increase the reliability and reduce the cost of both manned and unmanned space transportation, ultimately by a factor of ten. With the Falcon 1 and Falcon 9 vehicles, SpaceX offers highly reliable/cost-efficient launch capabilities for spacecraft insertion into any orbital altitude and inclination. Starting in 2010, SpaceX’s Dragon spacecraft will provide Earth–to-LEO transport of pressurized and unpressurized cargo, including resupply to the International Space Station (ISS).