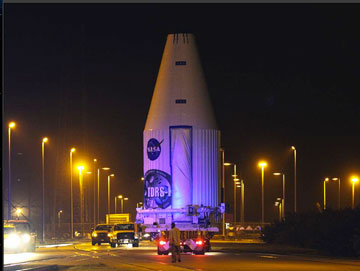 TDRS-K Spacecraft Ready for Launch NASA's Tracking and Data Relay Satellite, TDRS-K, enclosed in its payload fairing, passes through the Launch Complex 39 area at NASA's Kennedy Space Center on Jan. 20, 2013 as it travels from the Astrotech payload processing facility in Titusville, Florida, to its launch site.

NASA's Tracking and Data Relay Satellite System will get an upgrade this week when the agency launches the first of a new generation of communications satellites to connect spacecraft to the ground stations that support them.

A United Launch Alliance Atlas V 401 is due to loft the TDRS-K spacecraft Wednesday, January 30 on a course to geosynchronous orbit where the spacecraft will have a wide view of Earth.

NASA's Tracking and Data Relay Satellite System, also known as the Space Network, will get an upgrade this month when the agency launches the first of a new generation of communications satellites to connect man of NASA's spacecraft to their control centers and mission data centers.

United Launch Alliance Atlas V 401 is due to loft the TDRS-K spacecraft January 30 on a course to geosynchronous orbit where the spacecraft will have a wide view of Earth. From that position, the spacecraft will provide communications with NASA's fleet of Earth-orbiting science spacecraft, including the International Space Station and NASA's Hubble Space Telescope.

The advanced spacecraft, known as TDRS, is needed to ensure the communications network is able to provide critical services to user spacecraft in the next decade.

"We have some aging satellites, so we need new spacecraft to go in there and help carry more of the data," said Diana Calero, mission manager for NASA's Launch Services Program, or LSP, based at Kennedy Space Center in Florida.

The processing for this mission included the standard in-depth reviews but also took into account extra engineering sessions to investigate whether the underperformance of an upper stage engine during an earlier, non-NASA launch would occur during the TDRS ascent, said Tim Dunn, NASA launch director. The Centaur upper stage used by the Atlas V uses an engine similar to the one that underperformed during a Delta IV launch last year.

"Our engineers and analysts from the Launch Services Program, working alongside the United Launch Alliance engineers, we've been methodically reviewing data and working very closely on flight clearance for the TDRS-K mission, so that's been our biggest challenge to date," Dunn said.

The TDRS spacecraft is large and looked impressive as it stood with its large steerable antennas folded over top of each other inside a processing hangar at Astrotech in Titusville, Fla. The spacecraft, built by The Boeing Company in El Segundo, Calif., arrived in Florida on Dec. 18 on an Air Force C-17 transport plane. Following testing, fueling and launch preparations, it was positioned inside a two-part payload fairing and taken to Space Launch Complex 41 at Cape Canaveral Air Force Station.

Onboard thrusters will provide the final propulsion to reach geosynchronous orbit following separation from the Centaur upper stage.

"The antennas are furled and they have a certain amount of days that they can stay furled," Calero said. "If they pass that, then the antennas, when they're deployed, they can actually degrade in space and so we have to play close attention to how long they stay furled. So it was really challenging trying to schedule the shipping of the spacecraft with the moving launch date. We're still watching it very closely."

TDRS-K will be the 11th TDRS launched by NASA since it began building the space-borne network in 1983. The most recent spacecraft launched in 2002 on an Atlas IIA.

Orbiting about 22,300 miles above Earth, positioned roughly over Hawaii, TDRS-K will use its antennas to receive and transmit signals from a wide range of spacecraft to Earth in several frequency bands.

Even rockets carrying spacecraft carry TDRS-compatible communications gear and transmit telemetry during ascent through the orbiting network instead of ground stations, an advancement that saves money by not having to field specialized aircraft and ships or maintain a string of remote stations to monitor a launch.

The number of TDRS satellites required to serve NASA's orbiting fleet of scientific spacecraft has grown from the original architecture of two to six to service the requirements of a diverse set of users.

The communications constellation replaced the ground stations positioned on Earth so NASA could communicate with astronauts in orbit. That system allowed contact only when the spacecraft passed within range of the antennas, however. With TDRS satellites in place, controllers have near-constant contact with spacecraft.

"If you roll back in history maybe 30, 40 years, back in Mercury days and Apollo there were no TDRS satellites for communication so you had outages between the ground stations," Buchanan said. "We didn't want the outages, we wanted continuous (communications), so that's what motivated the desire for the Space Network."

"We've had to decommission two spacecraft in the last few years due to the electronics degradation after 20, 25 years," Buchanan said. "We're launching now for an immediate need and replenishment schedule."

When their service life is up, the TDRS satellites are boosted about 250 miles higher into what's called a disposal orbit.