[SatNews] This is the 17th consecutive year that the company was recognized for its satellite communications or television systems and in the case this year, has been recognized for both.

KVH Industries, Inc., (Nasdaq: KVHI) is pleased to announce it has been recognized for outstanding marine electronics products in two satellite antenna categories. KVH’s TracPhone V3-IP received theNational Marine Electronics Association’s (NMEA) 2014 Product Award in the satellite communications antenna category, and theTracVision TV1 received the NMEA 2014 Product Award in the satellite TV antenna category. This is the 17th consecutive year that KVH has achieved the NMEA distinction for its satellite communications or television systems and in most years, as is the case this year, has been recognized for both. NMEA is an industry group made up of more than 600 companies, including manufacturers, dealers, and boat builders.

“Winning a NMEA award is especially meaningful because the recognition comes from skilled professionals who have firsthand experience with the installation and performance of our products, as well as those of our competitors,” says Martin Kits van Heyningen, KVH chief executive officer. “They work with our TracVision and TracPhone systems every day, and we consider their recognition as the highest honor.” 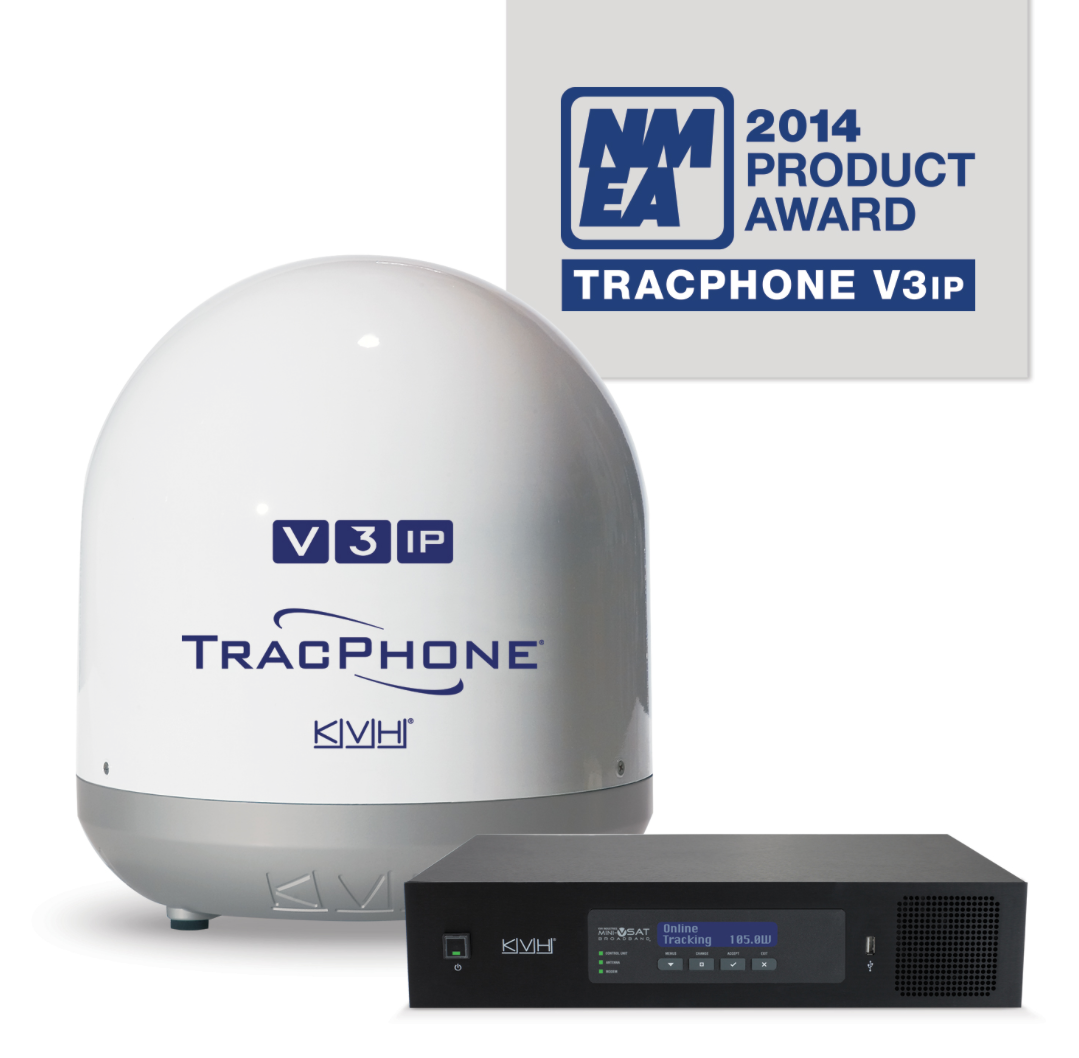 “More and more of our customers are seeing the advantage of having a satellite Internet and phone system on their boats, and the TracPhone V3-IP is always a favorite choice,” says C.J. Webber, chief executive officer of Atlantic Radio Telephone, a leading marine electronics dealer based in Miami, FL. “The V3-IP’s compact size, reliable performance, and extremely affordable airtime rates make it a great value even for a small boat. Plus, our customers are finding that they can spend more time on the water if they can have Internet access on the boat the whole time.” 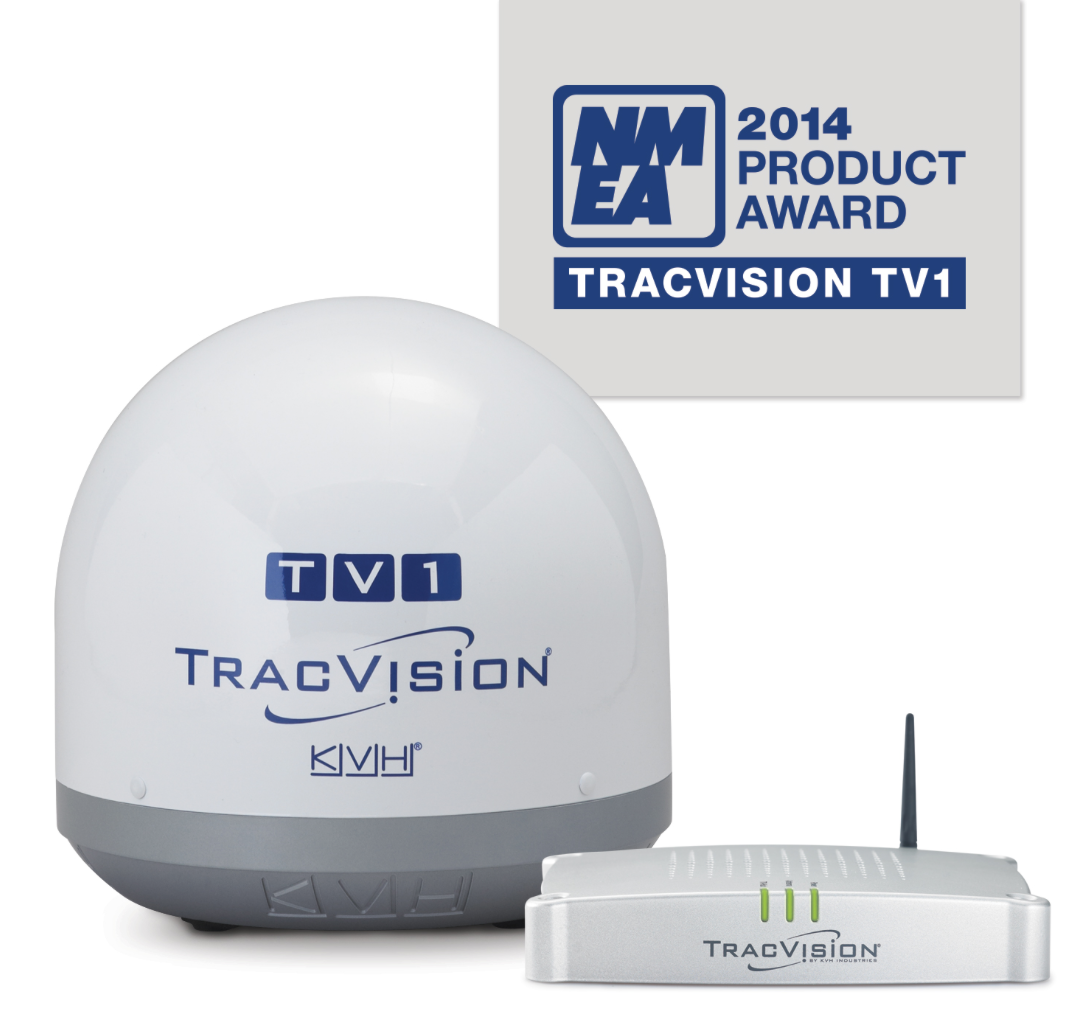 The TracVision TV1, which was introduced earlier this year, is an ultra-compact marine satellite TV system ideal for smaller boats and coastal cruising. With a 32 cm (12.5 inch) antenna, the TV1 makes it possible for boaters to enjoy their favorite high-definition television programming while spending time on the water. The TV1 system includes an IP-enabled TV-Hub that enables easy setup and operation, and makes it possible to access system information from a smartphone, tablet, or computer.

“KVH’s new TracVision TV1 has been a winner with our customers, who see TracVision as the only choice for satellite TV on their boats,” says John Filippelli, owner-operator of JFI Marine Electronics, a leading marine electronics dealer based in St. Clair Shores, MI. “What’s particularly appealing about TV1 is its small size and top performance. Plus, with its single-cable design, it is a perfect retrofit item that’s easy to install. In a very short time, our customers can be watching their favorite TV show while relaxing on their boat after a day of fishing or cruising.”

KVH Industries is a provider of in-motion satellite TV and communications systems, having designed, manufactured, and sold more than 175,000 mobile satellite antennas for applications on vessels, vehicles, and aircraft. KVH is also a leading news, music, and entertainment content provider to many industries including maritime, retail, and leisure. Videotel, a KVH company, is a leading provider of maritime training. KVH is based in Middletown, Rhode Island, with research, development, and manufacturing operations in Middletown, Rhode Island, and Tinley Park, Illinois, with other offices in Belgium, Brazil, Cyprus, Denmark, Hong Kong, Japan, the Netherlands, Norway, Singapore, and the United Kingdom.