Orbital Sciences...Successful Test — One Down, Two More To Go 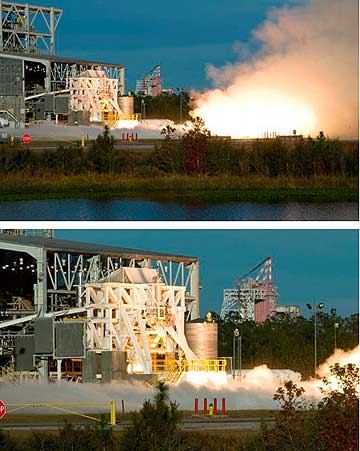 AJ26 Hotfire Test Successful!
[SatNews] Orbital Sciences Corporation (NYSE: ORB) today announced the successful test firing of the liquid fuel AJ26 engine that will power the first stage of the company’s Taurus® II space launch vehicle. In a test conducted earlier today at NASA’s Stennis Space Center in Mississippi, Orbital and its engine supplier Aerojet, a unit of GenCorp (NYSE: GY), test fired an AJ26 engine at the E-1 test stand.  The E-1 test stand was refurbished by Stennis over the past year specifically for Orbital’s Taurus II program.  The AJ26 test firings at Stennis are being conducted to verify the upgrades made by Orbital and Aerojet to the baseline NK-33 engine and overall engine performance in its final flight configuration.

This initial test, the first in a series of three firings, lasted 10 seconds and served as a short-duration readiness firing to verify AJ26 engine start and shutdown sequences, E-1 test stand operation, and ground test engine controls.  Preliminary data review indicated that all test objectives were met.  The test was conducted using a joint operations team comprised of Orbital, Aerojet and Stennis engineers, with Stennis personnel acting in the role of test conductor.  The joint operations team, in conjunction with other NASA engineers, will conduct an in-depth data review of all subsystems in preparation for the upcoming 50-second hot-fire acceptance test to be performed in several weeks.  A third hot-fire test at Stennis is also planned for the first engine to verify tuning of engine control valves.

The E-1 stand used for the test is located in the E complex at the Stennis Space Center and was modified by Stennis over the past year to accommodate the Taurus II program’s AJ26 first-stage engine.  Modifications included conversion from horizontal test orientation to vertical orientation through construction of a below-grade flame duct and the addition of subcooled liquid oxygen supply capability.  Each engine pulled from Aerojet’s stock in Sacramento, California, and subsequently modified to the AJ26 configuration, will be acceptance tested at Stennis prior to being shipped to the Taurus II integration site at Wallops Flight Facility, Virginia.